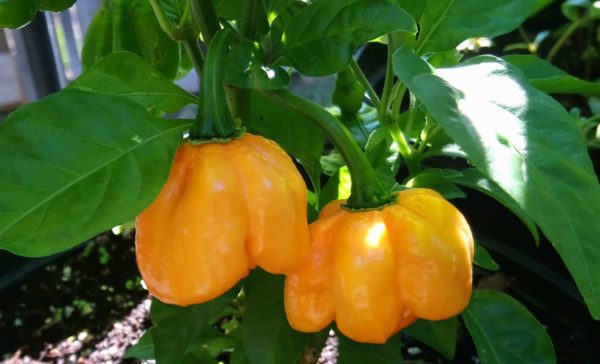 If you’re considering buying fresh habanero or scotch bonnet peppers, or going seed shopping to plant them in next year’s garden, you might be wondering if there is a difference between the two.

In the kitchen or the garden, both are interchangeable, although there are subtle differences.

Habaneros and scotch bonnets are both varieties of the Capsicum chinense species of pepper, which is different from the C. annuum varieties of jalapenos, bell peppers, cayennes, and banana peppers.

Like all chili peppers, the C. chinense ancestor of habaneros and scotch bonnets originated in the Americas, likely first domesticated in modern-day Mexico or Bolivia over 10,000 years ago. From there, C. chinense spread throughout the Americas and diverged into different varieties of many colors and levels of heat.

Habaneros first appeared in Yucatan, Mexico and scotch bonnets originated in the Caribbean, likely in Jamaica. Both are still used in their regional cuisines to this day.

However, the type of burn habanero and scotch bonnet peppers will give you is different from jalapenos, cayennes, and Thai chilis. Habaneros and scotch bonnets have less of a stinging type of burn and tend to start off mild and quickly ramp up to their full intensity. It’s hard to describe in words but imagine a Thai chili burn as a red-hot nail hammered through your tongue while a habanero or scotch bonnet is like a cold nail sitting on your tongue that gets white hot after a few seconds.

There are some low-heat and high-heat cousins of both peppers. For example, pink habaneros have very low heat, and there is a habanero variety called habanada which has the flavor of a habanero without any heat at all. On the high end, there is the Red Savina habanero, which can get over 500,000 SHU, and once held the world record for the hottest pepper until the ghost pepper dethroned it in 2007.

Where habaneros and scotch bonnets mainly differ is in their flavor and aroma. Both have a characteristic C. chinense aroma when you cut into them, which is a combination of fruity and floral.

Habaneros tend to have a more floral or perfume smell and taste while scotch bonnets are much more fruity. Occasionally, habaneros can have slightly smoky notes, especially the Caribbean red habanero.

The orange habanero is the classic habanero still widely cultivated in Yucatan, Mexico. It is fruity, floral, and loaded with heat. It is traditionally used as a ripe or unripe pepper in Yucatecan cuisine.

Once considered the hottest pepper in the world, the Red Savina is still the hottest habanero you can find. It has an average heat of over 250,000 SHU and can reach well over 500,000 SHU in heat, which is over 100 times hotter than an average jalapeno.

A popular red variety, the Caribbean Red is a scorching hot habanero that’s more floral with smoky undertones compared to its orange cousin. In the garden, Caribbean Red habaneros are very prolific, with one or two plants being enough for most pepper growers.

Pink habaneros are a mild, pinkish variety habanero. Their shape is more pointy than other habaneros. A great producer in the garden, pink habaneros give excellent yields of very mild pods. It’s hard to find consistent data on heat, with some sources saying it’s around 500 SHU and others putting it at over 1000 SHU.

Habanadas are heatless habaneros. They tend to be more pointy, slightly wrinklier than other habaneros, with juicy flesh and medium-thick walls. When you cut into it, it will smell exactly like a habanero, and when you bite into it you’ll expect to feel heat but it won’t burn at all. Great for toning down homemade hot sauces, adding into salads or desserts, or even just snacking in the garden. Highly recommended if you love the smell and taste of habaneros but can’t stand the heat.

MOA stands for the Ministry of Agriculture (in Jamaica). The MOA scotch bonnet is considered the gold standard for scotch bonnets in Jamaica, and undergoes rigorous selection standards for quality. It commonly comes in yellow, orange, or red varieties. Like most scotch bonnets, the MOA is very fruity and sweet, and extremely hot. One my personal favorites of all the C. chinense varieties.

Among chili pepper aficionados, the Freeport is one of the most popular scotch bonnet varieties, and originates from the Bahamas. The Freeport is a productive variety that will produce loads of fruity orange pods on a tree-like bush that can get up to 3 feet tall.

If you want to experience the fruity flavor of the scotch bonnet without the heat, the sweet bonnet is a mild (but not completely sweet) variety with heat less than a jalapeno. This flat-topped, pointy-bottomed pepper has slightly smoky notes.

Many peppers come in a brown “chocolate” color, and the scotch bonnet is no exception. The brown color comes from the mix of green and red pigments in the flesh. Although chocolate scotch bonnets have the same heat as other ones, the type of burn tends to be more intense compared to orange, red, and yellow varieties.

The Bahamian goat is a scotch bonnet in everything but name. It has the same characteristics as the MOA scotch bonnet (shape, size, heat, and flavor), but comes in a pale orange, slightly pink color. It’s very fruity, extremely prolific, and there is almost no bitter flavor when eaten fresh. In my opinion, it is at least as equal to the MOA scotch bonnet in terms of flavor and is an annual staple in my garden.