Growing your own vegetables is rewarding in so many ways, but if you don’t have the space in the ground to grow them, you can actually grow lots of cucumbers in a single container. Cucumbers are part of the cucurbit family which includes winter and summer squashes, zucchinis, pumpkins, and melons. Like most cucurbits, cucumbers love to sprawl out and grow into large plants, but if you choose the right variety and right container, you can easily grow cucumbers in a container.

Growing cucumbers in containers is possible if you have a large enough container, and offers many benefits that you get from container gardening such as being able to control the growing conditions, protect them from harsh weather, and dealing with less disease and pest pressure. You should grow cucumbers in large containers, at least a foot (30 cm) deep and wide, and cucumbers will thrive in 5-gallon buckets. The best cucumbers to grow in containers are bush varieties which are compact or parthenocarpic varieties which will produce fruit without pollination and give you substantial yields.

Why Should I Grow Cucumbers in a Container?

Growing cucumbers in containers offers a few benefits compared to growing them in the ground. The main advantage of growing your cukes in pots is that you have full control over the cucumber’s growing conditions. If a place is not sunny enough, you can easily move a container to another part of your yard or balcony. If you’re expecting a major storm, you can carry your cucumber to a sheltered place on your deck or patio, or inside your garage to protect it from deadly winds or hail. As a container gardener, you’ll also be able to ensure your cucumber plants have all the nutrients they need with some rich potting soil and additional fertilizer.

Container cucumbers tend to have fewer pest and disease problems compared to cucumbers grown in the ground. One of the most common diseases that affect cucumbers (and zucchinis) is powdery mildew. Powdery mildew is a fungal disease which starts with white powdery spots on the leaves and stems of many plants, eventually weakening and killing the plant as more leaves get sick and die. The spores of powdery mildew are spread from the soil onto your plant, which is why it usually starts on the lower leaves. By using a good potting mix in a container, you can reduce your chance of getting powdery mildew or at least postpone the disease until much later in the season.

Cucumber beetles (both striped and spotted) are the bane of every cucumber patch. They lay their eggs in the soil and their larvae eat the roots and underground part of the stem of your cucumbers. They also munch on buds, fruit, stems, and leaves, and can spread disease. Unless you use plain garden soil from your yard to fill your containers (which I don’t recommend anyway), you can avoid cucumber beetles killing your plants before you get your first cucumber.

What Kind of Container Can I Use to Grow Cucumbers?

As with all container vegetables, ensure your container has adequate drainage holes at the bottom. Cucumbers love water, but can easily get stunted or die from root rot if their roots are constantly soaked in water.

Can I Grow Cucumbers in a 5 Gallon Bucket?

For most cucumber varieties, a 5-gallon bucket is perfect as long as you have good potting soil and adequate drainage holes at the bottom. When using buckets, I prefer to drill some holes in the bottom and along the sides near the bottom.

Cucumbers grow best in full sun and adequate water, and a larger container will not only allow for your cucumber plant to grow larger, but will also allow you to get away with watering it less; small containers tend to dry out much more quickly with mature plants.

Fertilize your container cucumbers the same way you would your container tomatoes. Even if you use new potting mix loaded with nutrients, it’s likely that your cucumber plants will deplete the nutrients within a month or two. Regular weekly feedings of a well-balanced fertilizer in the early stages and then switch to one with less nitrogen (N) and more phosphorus (P) and potassium (K) as you start getting more flowers and fruit will ensure optimal plant health. You can also use a slow-release fertilizer if you can’t regularly feed your cucumbers.

Cucumbers are natural vining plants with tendrils that help them climb up strings and trellises, and you will need to provide some kind of small trellis, net, cage, or set of stakes to support them. Even if you decide to go with a bush cucumber, it will still need some support as cucumbers’ heavy fruit set tends to weigh down the plants.

Cucumbers, like other cucurbits such as squash, zucchini, pumpkins, and watermelons, naturally have separate female and male flowers. Unlike a tomato or pepper which can self-pollinate all in one flower, cucumbers need to be pollinated by their male flowers or the pollen from another cucumber plant. If female flowers don’t get pollinated, they’ll shrivel up and fall off.

In order to guarantee good yields, you can manually pollinate them by pulling off a male flower (a flower with just a stem behind it) and gently touch the middle of the female flower (a flower with a baby cucumber behind it) with the middle of the male flower. Alternatively, you can use a brush or Q-tip to collect pollen from male flowers and gently dab the center of female flowers. If you don’t like this idea, there’s good news: parthenocarpic varieties of cucumbers (discussed later) will set fruit without any pollination.

Finally, harvest cucumbers regularly to promote more blossoms and fruit. Keeping cucumbers on the plant too long, when they start to ripen, sends a signal to the plant that it’s reaching the end of its life and it’s time to focus on producing seed instead of fruit.

The only major disadvantage to growing cucumbers in containers depends on the size of your container. While you could get a pepper plant to grow in a 1-gallon (3.7 L) container successfully albeit with a stunted plant and fewer fruit, a cucumber in such a small pot would likely set almost no fruit and would quickly show signs of plant stress. A smaller container will also require more frequent watering.

Another issue is with pollination. If you only grow one plant, or you’re growing it up in a high balcony away from most insects, you may need to manually pollinate unless you grow a parthenocarpic variety of cucumber.

For container gardening, there are two types of cucumbers which I highly recommend: bush cucumbers and parthenocarpic cucumbers. 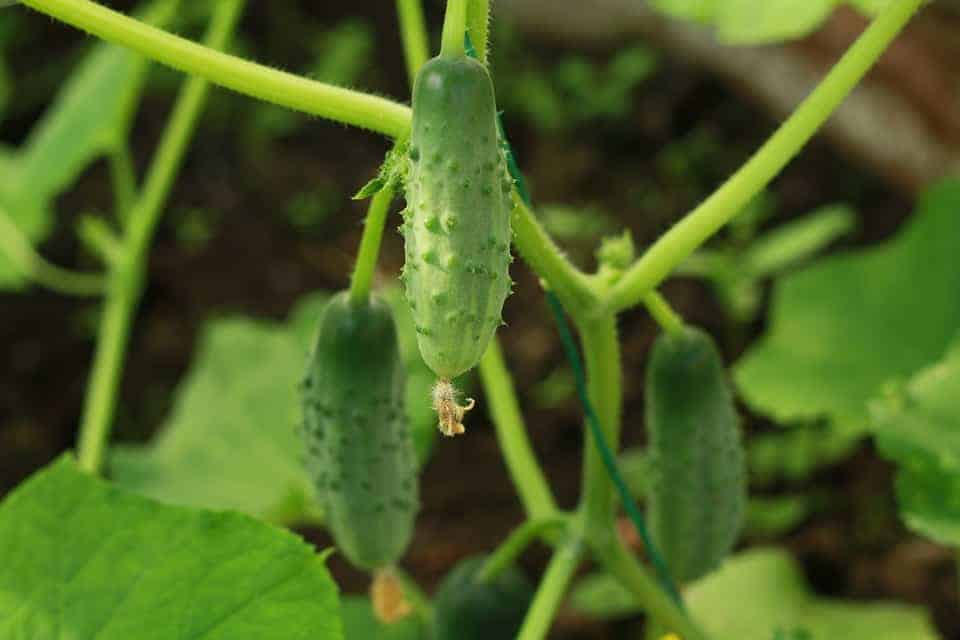 Think of bush cucumbers the way you think of bush tomatoes. They are stocky and more bushy, not growing to very large heights. Bush cucumbers are ideal for containers, especially smaller ones, but will still need some support like a tomato cage or trellis. Popular bush cucumber varieties include the Bush Champion, Bush Pickle, Picklebush, and Salad Bush.

As previously mentioned, cucumbers naturally produce both male and female flowers on the same plant, and in order to get fruit, you need those female flowers to get pollinated. Parthenocarpic varieties, however, don’t need any pollination in order to produce fruit, and generally produce almost all female flowers. The result is virtually every single flower will produce a full-sized cucumber, even if you grow it in a greenhouse or indoors, and they’re seedless to boot!