If you’ve ever grown cucumbers before, you’d know how easy it is for them to get out of control. Most cucumber plants grow as sprawling vines, very similar to tomatoes, but unlike tomatoes, they have little tendrils that grab onto stakes, trellises, strings, or even other plants for extra support. You can use the cucumber’s natural growth habit to your advantage to grow cucumbers vertically.

Cucumbers can be grown vertically, and this is actually the way most gardeners are recommended to grow them. Despite cucumber natural tendency to grow like a vine and grab onto its surroundings, it doesn’t naturally grow vertically, and often needs help to train it up a trellis. Whether you grow vining cucumbers or bush cucumbers, you can and should train them to grow vertically. The most common method is using a trellis, but you can also use stakes, arbors, or, if growing a bush cucumber, tomato cages.

There are two ways a cucumber can grow: as a vine or as a bush. If you’ve grown tomatoes, you’ll know that there are indeterminate (vine) and determinate (bush) tomatoes; vine tomatoes keep growing and producing until the plant dies whereas bush tomatoes grow to a predetermined height and produce all the fruit at once. Similarly, vining cucumbers, which are the most common types of cucumbers, will keep growing, putting out side branches, and keep producing until something kills the plant. Bush cucumbers will grow shorter, but can also produce a lot of cucumbers. If you’re growing cucumbers in containers, bush varieties work best unless you have a very large pot to grow them.

Both vining and bush cucumbers will need support to grow them vertically, or else they will just flop over and your cucumbers will get eaten by crawling insects or rot on the ground.

The first and best choice for growing cucumbers is using a trellis or similar structure. The simplest trellis is a set of stakes in the ground with strings running across them horizontally so the cucumbers can be trained to climb up. This is how I grow my cucumbers, but I’ve also made some simple trellises from old stakes by screwing them together like a fence. You can really get creative and use bamboo poles, dried sunflower stalks, or even reuse old chainlink fences.

If you don’t have the time to make a trellis and need one right away, you can buy wooden or metal trellises at your garden center, or buy a simple folding trellis online. If you’ve got stakes/poles already, you can also get heavy duty trellis netting and staple it to your stakes and have your trellis up in minutes.

How Tall Should a Cucumber Trellis Be?

I’ve gotten away with some trellises as short as 4 feet (1.2 m), but they usually quickly outgrow the trellis. Ideally, you should aim for about 5-6 feet (1.5-1.8 m). Vining cucumbers can technically grow taller, but often the strong heat in the height of the summer stresses out the plants, leading to slower growth, and by that time, diseases start becoming a problem.

Another option if you want to try your hand at cucumber landscaping is training your cucumbers to climb up an arbor. The result is a beautiful arch covered in green leaves and hanging cucumbers. You can build one or buy one at a garden center, but a much cheaper option is to buy a cattle panel.

“Cucumber plants do have a natural ability to grab onto their surroundings with tendrils, but that doesn’t necessarily mean they’ll grow upward. While your cucumbers are growing, you will need to help them by gently weaving the branches up your trellis or arbor so the tendrils have time to grab onto them. “

Cattle panels, also called livestock fencing, is a standard galvanized steel fence used for livestock. It’s sold in 3-4 feet by 16 feet panels, which is perfect for an arbor. In the last five to ten years, more gardeners have been using them to “build” arches for . I say “build” in quotes because all you have to do is bend the cattle panel and secure it into the ground (it’s recommended to use metal T-posts) on either side of a garden path. One cattle panel and four T-posts will run you $20-30. Below is a good video showing how easy it is to set one up. Just make sure to secure the cattle panel to the T-posts with some wire or clips afterward.

Whatever you decide to use as an arbor, you can plant cucumbers on both sides and have them climb up and over to fill out the gaps.

If you’re growing bush cucumbers, you still need support to grow them vertically. If you have a tomato cage or similar cage, you can place it around your bush cucumber while it’s still small. You may need to tie some of the branches to the for extra support, but this is the most effective way to grow bush cucumbers vertically.

The simplest method of growing cucumbers vertically is the stake method, which is exactly what it sounds like: you grow your cucumbers up a stake. You can grow both vining and bush cucumbers this way, but since vine cucumbers can quickly get out of control with side growth, a stake might not be enough for them. Bush cucumbers, however, grow perfectly with one or two stakes for support, but require you to tie them up the same way you’d tie a tomato to a stake since cucumber tendrils might not be able to wrap around them as tightly. 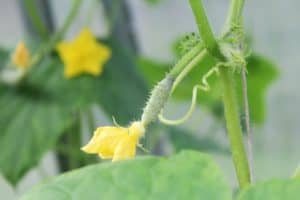 Training Your Cucumbers and More Tips for Successful Vertical Cucumbers

I’ve kept talking about “training” your cucumbers. What does that even mean? Cucumber plants do have a natural ability to grab onto their surroundings with tendrils, but that doesn’t necessarily mean they’ll grow upward. While your cucumbers are growing, you will need to help them by gently weaving the branches up your trellis or arbor so the tendrils have time to grab onto them. In some cases (such as using a stake or when the plant is still young and doesn’t have tendrils yet) you will have to tie the branches. Every so often, at least once a week, check your cucumbers to see if they’re getting out of control.

Most people don’t prune their cucumbers, but some people do in order to keep them tidy, like in a greenhouse where they might have rows of cucumbers growing up a trellis. I personally don’t prune my cucumbers (but regularly prune my tomatoes) but I may try it next season to see if there’s a difference. How it works is the main stem will put out flowers and leaves, and also new branches, which will themselves will have flowers, leaves, and more branches, and so on, so you would be pruning off some or all of those new branches so the cucumber continues growing up one vine.