Do Tomatillos Have Male and Female Flowers?

Tomatillos don’t have separate male and female flowers. Much like tomatoes, tomatillos have both male (anther) and female (stigma) parts in all their flowers.

Flowers with both female and male reproductive parts are called perfect flowers, but are also referred to as synoecious, bisexual, hermaphroditic, or androgynous. Most flowering and fruiting vegetables in the garden have perfect flowers, but some have separate male and female flowers like those in the cucurbit family (cucumbers, zucchini, squash, etc.).

While tomatillos have perfect flowers, they are very poor self-pollinators.

This has been confirmed with self-pollination tests in which tomatillo flowers were bagged and isolated and ended up with empty husks.

This is usually the reason why many gardeners notice empty husks on their tomatillos and wonder if they have separate male and female flowers. This most often happens either because they’ve only grown one tomatillo plant, or they did not have enough pollinators like bees in the garden.

Do You Need 2 Tomatillo Plants to Pollinate?

Since tomatillos are poor self-pollinators, for the best results and yields, you should grow at least two tomatillo plants so insects can cross-pollinate them.

Pollination can occur between two or more tomatillo plants of the same variety, so you don’t need to grow different types of tomatillos. Just make sure they are two plants grown from two different seeds. Propagated tomatillos from cuttings are genetically identical clones and won’t cross-pollinate.

They also don’t need to be next to each other, but the closer they are, the more likely insects will move between both plants and pollinate them. Attract more pollinators to your yard with flowers like sunflowers, flowering herbs, and other vegetables.

You can, of course, guarantee successful pollination by cross pollinating by hand (see below). 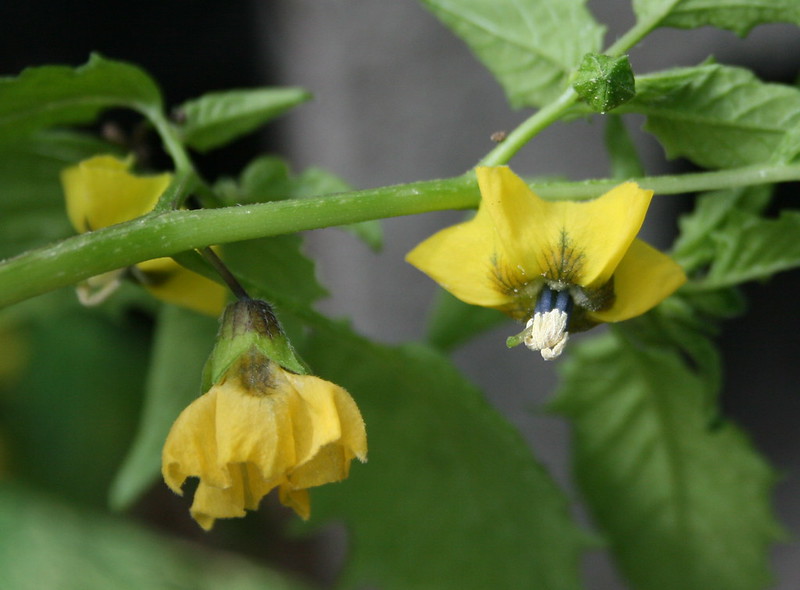 Can Tomatillos Cross Pollinate with Tomatoes?

Tomatillos are close relatives of tomatoes, but are not the same genus and therefore cannot cross pollinate.

Tomatillos are of the Physalis genus (Physalis philadelphica and Physalis ixocarpa) while tomatoes are the species Solanum lycopersicum.

Both tomatoes and tomatillos are part of the nightshade family, much like peppers, eggplants, and potatoes. While you sometimes may see cross-pollination between different species of the same genus (such as peppers), different nightshades can’t pollinate each other.

How Do You Hand Pollinate a Tomatillo?

Manually pollinating tomatillos is very easy and requires no tools, although a brush or cotton swab can be used.

Alternatively, you can take a small, fine brush or cotton swab and collect pollen by dabbing the central part of the flowers of one plant and then touch it gently on the central stigma of the other plant, and vice versa.

As mentioned above, you can hand pollinate two or more tomatillo plants of the same variety and successfully cross-pollinate them, so you don’t need to buy two different packs of seeds or plant starts.

How Long Does It Take for Tomatillos to Fill Their Husks After Pollinating?

It takes several weeks to over a month for tomatillos to fill their husks after pollination, depending on the variety. Generally, you should expect to wait 60 to 85 days after transplanting until your first tomatillo harvest. Smaller tomatillo varieties will “fill out” sooner than large tomatillos.