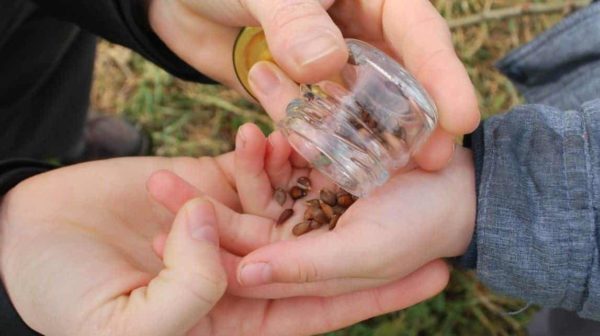 It’s that time of year when everyone is rushing to buy seeds for the new season. When looking for seeds to plant in the garden, you should know what terms like heirloom, open-pollinated (OP), and hybrid actually mean. They can all have their uses in the garden depending on your needs.

What Is the Difference Between Heirloom Seeds and Regular Seeds?

In terms of growth, there is no difference between an heirloom seed and a regular seed. Heirloom seeds are just seeds of open-pollinated (non-hybrid) plant varieties that have been cultivated for a very long time. However, heirloom varieties tend to have some unique characteristics such as different flavors or colors.

Heirloom seeds grow just like regular seeds do, but are categorized differently in recognition of their history. For instance, if you buy Bonny Best tomato seeds, it’s labelled as ‘heirloom’ because the variety was originally introduced in 1908, and been grown, had its seeds saved, and passed down over generations.

That said, you will notice that a lot of gardeners tout the value of heirloom seeds, and for good reason. Heirloom fruits and vegetables often have unique characteristics that you don’t find in grocery store produce.

Most modern varieties are bred for disease resistance, uniformity, and shelf life, often at the cost of flavor. That’s why heirloom tomatoes, for instance, tend to have different savory, sweet, tart, or even smoky flavors compared to store-bought tomatoes.

Heirloom vs. Open-Pollinated vs. Hybrid Seeds: What’s the Difference?

Open-pollinated seeds are seeds of plants that, if self-pollinated or pollinated by the same variety, will produce the exact same variety again. Heirloom seeds are open-pollinated seeds of old varieties that have been grown for a long time (at least 50 years according to some definitions, or at least since before 1951 by other definitions). Hybrid seeds are produced via cross-pollination and the resulting hybrid plants will not consistently produce the same plant if you save their seeds to the next generation.

When a plant breeds true, or is true to type, that means it will always produce seeds of the same type when self-pollinated or pollinated by the same variety. This makes it open-pollinated.

If an open-pollinated plant variety has been cultivated for a long time, we can call it an heirloom.

If you cross two different varieties with each other, the result is a hybrid and it will have a mix of characteristics of both parents. Hybrid seeds are often labelled as F1, which refers to the first generation. All F1 hybrids will have the same characteristics.

“[Unlike GMO,] the genes in hybrid seeds all come from the same species or very closely related species that can cross-pollinate.”

For example, if you pollinate a jalapeno with a Thai chili pepper, save the F1 seeds from the ripe jalapeno and plant them next year, the plants will look like a mix between a Thai and a jalapeno (usually a Thai shape but fatter, with glossy skin, and heat somewhere between a jalapeno and a Thai).

However, if you save the seeds from those hybrids, the seeds you get will not consistently grow into the same plant. These F2 seeds will grow into different plants with different characteristics; some like the F1 hybrid, some like either of the parents, and some with a unique mix of traits. This can be valuable for developing a new open-pollinated variety, but can be frustrating for the home gardener who is expecting the same variety but gets something totally different.

Are there Disadvantages to Planting Heirloom and Open-Pollinated Seeds?

So it might seem like F1 hybrids are a hassle to deal with since you can’t really save the seeds, and heirloom vegetables usually have better flavor. However, there are some reasons you might want to choose to grow heirloom or open-pollinated seeds.

What heirloom and open-pollinated varieties have in flavor comes at a cost of less resistance to disease and lower yields than hybrid varieties. Furthermore, some traits, like seedless fruit, are limited to hybrid varieties.

Hybrid varieties are more often than not bred for commercial growers, so they will have disease-resistance, higher guaranteed yields, vigorous growth, and longer shelf life. That isn’t to say that heirlooms can never have these characteristics, but it’s not nearly as prevalent as in hybrid varieties.

If you love growing flowers for cutting, some cut flower varieties are developed as F1 hybrids for unique colors and even pollenless traits. All pollen-free sunflowers, for instance, are hybrids.

Are Heirloom Seeds Harder to Grow?

While heirloom seeds may not always have the best traits for growth, they are almost as easy to grow as hybrids, and some heirlooms are highly adapted to certain environments and more suitable than even the most prolific hybrids.

For example, if you live in a very hot climate, the Arkansas Traveler tomato is an heirloom from 1963 that thrives in hot weather. Some heirloom tomatoes also have high disease resistance.

Can Heirloom Seeds Be Replanted? Can You Save Open-Pollinated Seeds?

All open-pollinated and heirloom seeds can be saved and replanted the next year.

Note that if you are growing more than one variety in the same area, there is a chance of cross-pollination. Self-pollinating fruits and vegetables can be isolated with a small mesh or paper bag over the blossoms until you see the fruit starting to grow.

How Can You Tell if a Seed Is Heirloom?

Unfortunately, there is no way to tell if a seed is heirloom just by looking at it or even growing it. The only way to verify whether a seed is heirloom or not is to check the variety and when it was first introduced. However, when buying heirloom seeds, they are usually listed as heirlooms.

Hybrid seeds are not GMO. They are developed by traditional breeding techniques and sometimes aided with molecular genetic analysis to identify that certain traits have been passed on successfully in the hybrid seed. They can even form in nature from natural cross-pollination. GMO seeds, on the other hand, are created via genetic engineering, which involves directly manipulating (inserting or deleting) genes in the seeds.

Hybridization in plants just means that two parents of different varieties cross-pollinated to produce unique offspring. It’s akin to the crossbreeding of two different dog breeds, such as a Cocker Spaniel and a Poodle producing Cockapoo puppies.

Genetically modified (GM) plants have specific genes inserted in them to give a certain trait. Instead of rolling the dice on crossing two varieties, you get the exact trait you want in the plant without losing out on other beneficial characteristics. For example, the most common type of genetic modification is the addition of genes to resist herbicides [source], which allows farmers to spray their fields with herbicides to kill weeds while keeping their crops alive.

The other difference between hybrid and GMO seeds is that the genes in hybrid seeds all come from the same species or very closely related species that can cross-pollinate. GMO seeds can have any genes inserted, even animal genes (though as of this writing there are no commercially approved GM crops with animal genes).

There is an heirloom variety of tomato called Beefsteak, however, the name has now become a generic name for large, meaty tomatoes, so you might see some hybrids labelled as a beefsteak-type.

For example, Beefmaster VFN is a popular hybrid tomato that is called a beefsteak. For the classic heirloom Beefsteak variety, you can find seeds at various vendors online, such as Baker Creek, Victory Seeds, and Tomatofest.

However, there is an ongoing project to save Early Girl seeds over many generations to stabilize the traits into an open-pollinated variety.

Seedless watermelons are hybrids. Specifically, they have 3 sets of chromosomes (instead of the normal pair like us) which makes them sterile hybrids.

This article in Science World explains the process of developing seedless watermelons.