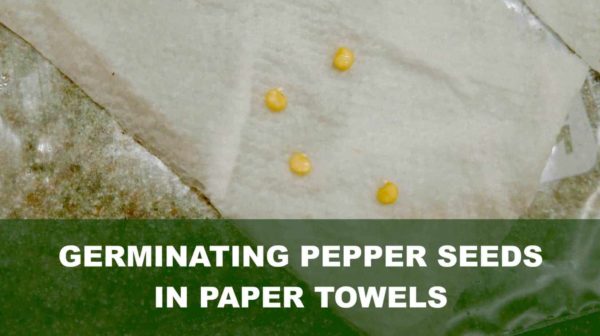 Being one of the warm weather vegetables with a fairly long growing season, many gardeners consider starting their pepper plants indoors before the last frost.

There are two methods I’ve successfully used to germinate pepper seeds indoors, which are the paper towel method and the traditional method of just sowing in potting mix or soil indoors. Whether you’re germinating hot pepper seeds or sweet pepper seeds, both of these methods work.

My preferred method of germinating pepper seeds is with the paper towel method. I like it because you can periodically check the seeds and know exactly which ones have sprouted.

What you will need:

How to Germinate Pepper Seeds in Paper Towels

1. Moisten your paper towel. Wring it out so it’s not dripping wet, but evenly moist all around.

2. Spread some pepper seeds on it, making sure no seeds are stuck together. Oversow to guarantee success (e.g. if you want 2 pepper plants, sow at least 4 to 5 seeds, or more if they are old seeds).

3. You can fold the paper towel over the seeds or leave the seeds exposed on top.

4. Place the paper towel with your pepper seeds in a sealed container or resealable bag to keep the moisture in.

6. After 4 days, and every 1 to 2 days after, periodically check your pepper seeds for germination.

7. If you see a tiny root emerging from a seed (this initial root is called a radical), you can transplant it into a pot by carefully removing it (I recommend using tweezers) and placing it in a pot with potting mix, seed starting mix, or soil, with the root pointing down. Plant it no deeper than half an inch.

8. After transplanting, water in gently so the potting mix or soil settles around the seed. Keep in a warm place. It may take a few more days for the sprout to emerge.

Pro-Tip: If the root is very long or stuck to the paper towel, you can very gently tease it out or you can cut the paper towel around the seed and root and transplant the seed with a piece of paper towel attached. If when transferring the sprout to the pot the root is not pointing down, it will eventually change direction and start growing downward again.

You can also germinate pepper seeds the conventional way by planting them in soil, potting mix, or seed starting mix. Just like the paper towel method, you will want to keep your seeds relatively warm to encourage faster germination.

The key to success with this method is to sow multiple seeds per hole. Plant 2 to 3 seeds, then thin out to one seedling if more than one germinates.

When thinning out your seedlings, it’s best to cut them at the base instead of pulling them out, since seedlings close together may have roots entangled, and pulling one out could damage the roots of its neighbor.

There isn’t really a name for this method that I’m aware of, but we can call it the mass-sow-then-transplant method. The idea is to sow several seeds in a small pot, spaced apart, then as the sprouts emerge, carefully tease them out of the soil and transplant them separately.

If you use this method, wait no longer than when the first true leaf appears. Ideally, you will take out the seedling while it still only has its two seed leaves, because the root will be easier to pull out without damaging it.

Why I Prefer the Paper Towel Method

The paper towel method is my preferred method of germinating pepper seeds for a couple reasons. The main reason is that you can see exactly what seeds are germinating and when, and if there’s a problem, like moldy seeds, you will know right away. If you sow them in potting mix, you could be waiting weeks until you realize the seeds aren’t going to sprout.

For instance, ghost peppers are notorious for taking a long time to sprout. At best you will wait 1 to 2 weeks, but sometimes they can take over a month to germinate. With the paper towel method, you can toss in several seeds and know which ones will sprout first so you can transplant right away. The first time I tried growing fatalii peppers, I waited 6 weeks after sowing in potting mix until I realized the seeds were not viable and had rotted. The paper towel method would have saved me weeks in my growing season.

How Can I Germinate Pepper Seeds Faster?

For those wanting to know how to germinate pepper seeds fast, the key is temperature. The higher the temperature within the recommended temperature range for germinating pepper seeds (68-86°F/20-30°C), the faster your seeds will germinate. Superhot peppers like ghost peppers need really warm temperatures, so for them, aim for 80°F (27°C).

Other than that, there isn’t much you can do to speed up germination. Older seeds will germinate more slowly, so if you can source fresh seeds (like seeds saved from last year) then that will also ensure good germination times.

What Should I Do If My Paper Towel Pepper Seeds Are Getting Moldy?

This rarely happens, but when it does, that also highlights the benefit of the paper towel method, since you can catch this problem as soon as it happens.

If you notice mold is a consistent problem, you can soak your paper towel and pepper seeds in consumer-grade hydrogen peroxide (3%) for 1 minute before using the paper towel method. This will help kill mold spores.

I Saved Pepper Seeds from a Cross I Made, Why Are My Seeds Not Germinating?

I’ve experienced this myself, and was able to grow one plant out of over two dozen or so seeds when I crossed a C. chinense with a C. annuum. Most of the time, though, pepper crosses produce highly viable seeds.

Can I Use the Paper Towel Method to Germinate Other Seeds?

Yes! In fact, you can use this method for tomatoes, eggplants, peppers, and even cucumbers and squash. In the case of the latter two, it’s important to move the seed into soil as soon as you see the initial root, since cucumbers and squash roots grow fast and they don’t like being transplanted often.

The only seeds recommended not to germinate with the paper towel method are small seeds like kale, parsley, celery, and herbs.