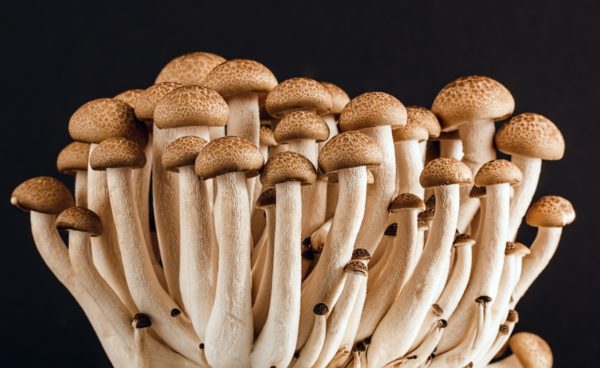 The top part of a mushroom that opens up as it matures, and where the spore-producing tissues are located.

A top dressing of some moisture-holding medium to help initiate mushroom formation, used in some forms of mushroom cultivation. The main purpose of a casing layer is to keep the surface of the colonized growing medium from drying out, as fungi need high humidity to start producing mushrooms. Common casing layers are peat moss and coco coir.

When a group of mushrooms that have grown together in a growing medium and are ready to harvest. Often after harvesting the first flush of mushrooms, you can get a second or third flush before the growing medium is mostly exhausted.

The spore-bearing part of a mushroom, usually located underneath the cap. Most common edible mushrooms have gills, but some have pores.

The root-like or cotton-like part of a fungus that colonizes and grows throughout a growing medium (such as rotting wood or in the soil).

A tiny, undeveloped mushroom, named so because it often looks like a small pin. Pins are also called primordia. When pins form, it’s called pinning or fruiting. Pins will rapidly grow into large, full-sized mushrooms.

The spore-bearing part of a mushroom, usually located underneath the cap. Most common edible mushrooms don’t have pores, but some do, such as wild porcini mushrooms.

Spawn is a culture of fungal mycelium grown on a growing medium. One of the most common spawn substrates is grain spawn, consisting of moist, cooked whole grains which allow mycelium to rapidly grow. Spawn can be used to fruit mushrooms directly, or be used like seeds to inoculate more growing media such as logs, wood chips, manure, or sawdust.

Spore prints are the pattern of spores left on a sheet of paper, foil, or glass when a mature mushroom cap is placed on it undisturbed for several hours up to a day. Spore prints can be used to help determine the species of a mushroom (combined with other characteristics) as different mushrooms will have different patterns and colors of spore prints. Spore prints can also be used to collect spores to grow mushrooms.

The thin membrane that attaches a developing mushroom cap to the stalk. When the mushroom cap opens, the veil breaks. Some species of mushroom have a ring around the stalk where the veil was once connected.