Leeks are the underdog of the onion family and one which doesn’t get enough attention in the kitchen or the garden. They have a mild onion flavor and can be used in a plethora of dishes. They can even be sliced into thin strips lengthwise and fried as a crispy side dish.

Why You Should Regrow Leeks from Cuttings

Growing leeks from cuttings is a rewarding way to extend your produce, whether homegrown or bought at the grocery store, and grow food essentially for free.

And unlike some other methods of regrowing vegetables, it’s dead simple to regrow leeks from scraps. If you’ve ever regrown green onions in water, it’s the exact same process.

Because it’s so simple and is almost guaranteed to succeed, growing leeks from cuttings is a fun and easy project for the whole family, and is a great learning experience for kids and adults alike.

If you continue to grow, harvest, and keep growing your leek cuttings, eventually they will bolt (produce a flower stalk) and go to seed. You can save these seeds and plant them in early spring, so regrowing leeks from cuttings is also a way to get free leek seeds. 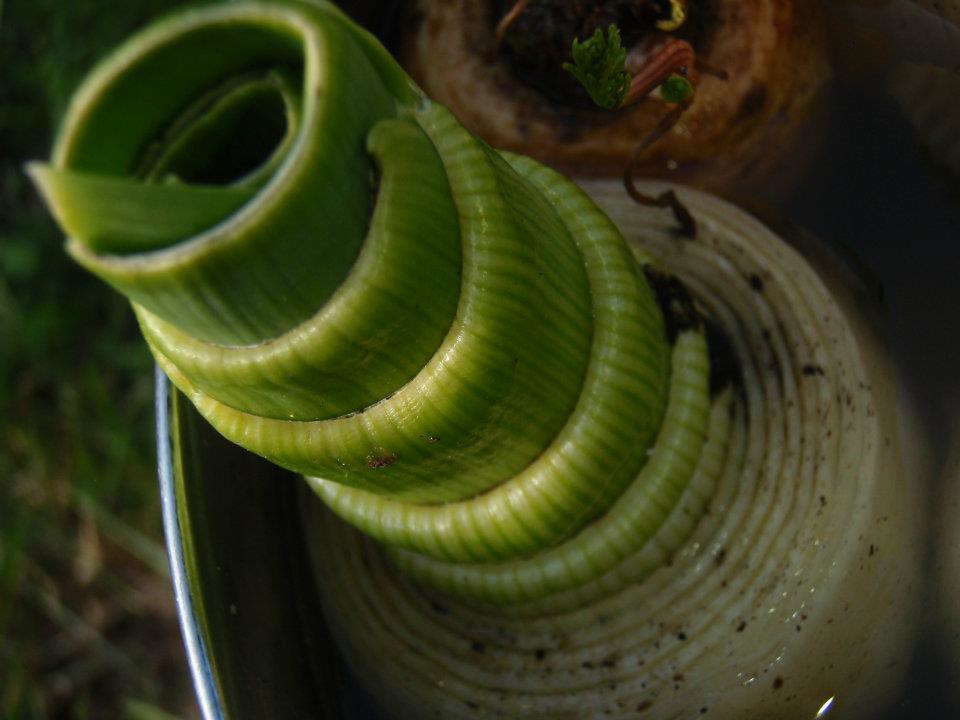 How to Grow Leeks from Cuttings: Step by Step

First, you will need to have leeks which still have the roots coming out of the bottom. It’s okay if the roots have been trimmed back. If your leeks have just a flat bottom with no roots, they may still grow roots but you might have less success. Make sure the leeks have not been split lengthwise before making your cuttings.

You can grow leeks from cuttings in water, in a pot indoors, or plant it outside in a pot or in the ground.

Take the leek you want to regrow and use a sharp knife to cut off the bottom 1 to 4 inches, leaving the roots intact. If you plan to grow it outside, it’s better to have at least 4 inches of stalk so you can bury it deeper for extra support (leeks have shallow roots and are normally planted with the stalk partially buried). The top part of your leek can be used for cooking.

You can either place the leek cuttings with their roots into a container enough water to keep the roots submerged or you can plant them in moist soil or potting mix. If planting in soil indoors, bury them at least half an inch deep, while leaving the top part exposed. Leave in indirect light out of direct sun until new growth appears. If planting outdoors, use longer cuttings and plant them deeper for extra support.

It may take more than a week to see any growth. During this time, ensure your leeks’ roots are kept moist, especially outdoors where they can dry out more quickly. After new growth appears, move your indoor leek cuttings to a sunny window. Leeks grow from the center and outward.

Leeks are edible at any stage of growth, so as soon as you see enough new growth to harvest and eat, you can do so. If grown outside or in a pot, you can use sharp scissors and harvest what you need while leaving the base of the leek to continue growing. For leek cuttings grown in water, you can take them out and use a kitchen knife to slice off the parts you want to use on a cutting board, then plop them back into their container.

You will be amazed how your leek cuttings will seemingly grow in just water. As long as they’re getting enough sunlight, leek cuttings in water will continue growing for weeks or even months. This isn’t surprising as plants need sunlight, water, carbon dioxide, and oxygen to live. However, if you plan to keep your leek cuttings going for a while, they will grow faster and healthier if you give them fertilizer, which has key nutrients like nitrogen, phosphorus, and potassium, and micronutrients like calcium and magnesium.

For leeks grown in soil, use any kind of balanced, slow-release fertilizer to keep growth going for months. If you have leeks in water, you can add very small amounts of liquid plant food.

Will Leeks Keep Regrowing from Cuttings?

Yes, but not forever. Leeks are considered biennials, meaning they have a 2-year life cycle. In the second year, after a dormant cold period, leeks will go to seed, producing a long seed stalk and large flower head. While they can technically continue growing for more than 2 years, the main plant won’t be as edible since the stalk will get more woody and fibrous. Keep in mind that store-bought leeks might already have gone through a cold period and flower in the same year. You can still save the seeds and replant the following year, even from store-bought leeks.

Do I Need to Fertilize My Leek Cuttings?

While fertilizing is important for growing healthy leeks, it’s not necessary for short-term cutting growth. Leeks will continue growing without fertilizer, even in water, although they may grow more slowly and grow thinner stalks since they won’t have enough nutrients for proper growth.

Why Are My Leeks Growing Only Green and Not White Stalks?

Leek stalks are naturally green when exposed to sunlight. They are only white when kept in the dark. The way leeks are usually grown in the garden is by burying the stem or hilling up soil around it so that they turn white and tender. Some gardeners will also cover them in paper towel rolls to block out the sun. This practice is called blanching, and is used for green onions and celery stalks, too.

Since your leek cuttings are growing entirely in sunlight, the new growth will be all green. If you want white stalks, you can wrap the base of the new growth in something that will block sunlight, like plastic, newspaper, or empty paper rolls. Over the course of several weeks, the covered part of the stalk will lose its color and turn white.