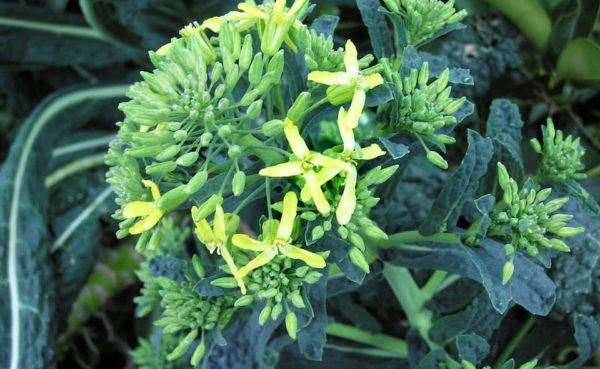 If you love kale, growing (and eating) your own is one of the most satisfying experiences as a gardener. You’ll find kale is tough and resilient, giving you multiple harvests all season long.

Seed-saving is one of the most important skills you can cultivate (pun intended) as a gardener which not only helps you save money from having to rebuy seeds every year but also allows you to preserve your favorite varieties.

Each vegetable has its own little quirks when it comes to saving seeds. Unlike tomatoes or lettuce, kale is a biennial plant which will produce seeds in its second year. After letting your kale’s seed pods mature and dry up, you can collect the seeds and store them in a cool, dark, and dry place.

When Does Kale Produce Seeds?

Kale, much like other brassicas such as broccoli, cabbage, and Brussels sprouts, is a biennial plant, which means it has a 2-year life cycle and produces seeds in its second year. Very rarely, like when your kale plants are really stressed, will they produce flowers and seeds.

The following year after you’ve overwintered your kale, as the weather gets warm again, they will bolt, which is when they produce a tall flower stalk.

Bolting generally makes leafy greens taste more bitter, but in the case of kale, the change in flavor is minimal. You can also cook and eat the bud clusters like broccoli if you don’t intend to save the seeds.

What Triggers Bolting in Kale?

In most leafy green vegetables, bolting is triggered simply by an extended period of hot and sunny weather. Since kale is a biennial, this alone is usually not enough to cause bolting.

Kale needs a period of dormancy in cold weather in order to bolt when the weather warms up again. You don’t have to wait 2 full years to get kale seeds. So, whether you plant your kale in the spring or late summer, as long as they survive the winter, they will go to seed the following year.

After kale bolts, the buds will open up into those vibrant yellow flowers shared by all brassicas. However, kale is mostly self-incompatible, meaning it cannot self-pollinate. In order for successful pollination, it’s important to have more than one kale plant to encourage cross-pollination. They can be of the exact same variety, but they need to be plants grown from different seeds.

If you don’t have many pollinators in your garden or you want to guarantee pollination, you can manually pollinate your kale. Take a small brush or cotton swab, dabbing gently on the flowers of one kale plant to collect pollen and then touching the middle of open flowers on your other kale plants to pollinate them.

How to Save Kale Seeds

If your kale has been pollinated, eventually you will see the flowers die back and form long seed pods. If you’ve ever grown arugula or mustard, you’ve probably seen similar pods before. They’re kind of like really tiny, thin bean pods.

Wait until the seed pods have turned brown/yellow and dried on the plant. The longer you wait, the better chances of having more viable seeds.

Once completely dry, you can save the seeds by cutting off the branches and rubbing the seed pods between your hands over a large bowl to open them up and release the seeds. At this point, the pods can easily open, popping out seeds everywhere, so be careful when doing this so you can save as many of the seeds as possible.

Your bowl will likely have lots of little sticks and seed pods mixed in with your kale seeds. Fortunately, they are less dense than kale seeds, so you can shake the bowl outside and blow gently into the it to blow away the debris while the seeds remain. This is called winnowing. You should have mostly seeds left.

The seeds may still have some moisture, so to extend their shelf life, place them on a paper towel or in a bowl to air dry for at least a week, then store them. Do not oven-dry or use a food dehydrator to dry your seeds, as that could end up killing your seeds.

How to Store Kale Seeds

For best results, store your kale seeds in an airtight container. I like using resealable plastic baggies since there’s no risk of spilling them, they don’t take up much space, and I can label them easily.

Another option is to use a plastic container like old prescription medicine bottles. I use these mostly for storing larger seeds, but they work great for kale. You can also simply store them in an old seed packet.

Always label your kale seeds because they look exactly like other brassica seeds, so it’s very easy to mix up kale seeds and cabbage seeds, for example.

Ideally, you should keep your kale seeds in a cool, dry, dark place, but it can simply be kept in ambient room conditions, as long as they are kept away from moisture.

How Long Do Kale Seeds Last?

If dried and stored properly, kale seeds will last 4 years. That doesn’t you should throw away your 5-year-old or 8-year-old seeds, though.

The 4-year figure is just how long you should expect reasonable seed viability. If you have 100 kale seeds, for example, a lot of them will still be able to germinate after 4 years, but you may need to sow a few more seeds to get the same number of plants, and they may take a little longer to sprout.

I haven’t planted old kale seeds but I did sow 17-year-old tomato seeds (which also have a shelf life of around 4 years). Most of the seeds didn’t germinate, but I was still able to get a few plants from them.