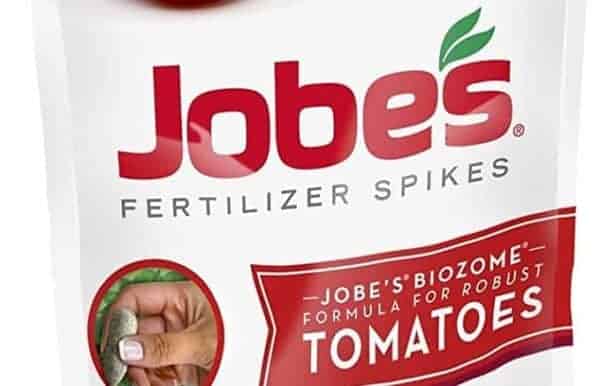 Two years ago, I was looking for fertilizers for pepper plants and having already used Jobe’s tomato spikes, I thought I’d look for Jobe’s pepper spikes. They don’t have any.

So, I ended up using my tomato spikes instead, had a good pepper season, and decided to read up more about it. This year, I’ve used more tomato spikes for peppers than tomatoes.

Jobe’s tomato spikes can be used for growing peppers, as both peppers and tomatoes have similar nutrient requirements. Tomato spikes are formulated with more phosphorus, which promotes more prolific blooms, which is important for both tomatoes and peppers.

If your peppers have been growing tons of leaves and no peppers, I would recommend using a tomato fertilizer rather than search for a pepper fertilizer. Tomato fertilizers are cheap and more easy to find, and are actually perfectly suited for growing peppers.

Peppers are relatively heavy feeders – not as heavy as tomatoes, but still requiring a good amount of fertilizer in a season.

Early in the season, or when they are pruned back, they need high amounts of nitrogen to fuel stem, branch, and leaf growth. As they start growing flowers and eventually peppers, they need less nitrogen and more phosphorus and potassium. Phosphorus is important for root growth and flower production, while potassium is important for fruit growth and overall plant health.

For this reason, I usually switching from a general purpose fertilizer early in the season to one formulated for flowering and fruiting a few weeks after transplanting.

Why Jobe’s Tomato Spikes Can Work for Peppers

Tomatoes are in the same family as peppers (nightshades), have similar growing patterns (leafy green growth, then flushes of blooms), and both thrive in similar growing conditions. Naturally, they need the same types and ratios of nutrients, but tomatoes need more fertilizer overall to thrive because they have heavier fruit sets and can grow much taller than pepper plants.

Jobe’s tomato spikes are a slow-release fertilizer that work over 8 weeks and have an NPK of 6-18-6, which means 6% of the fertilizer is nitrogren, 18% is phosphorus, and 6% is potassium, by weight. This high level of phosphorus will ensure your peppers can push out heavy blooms, which will mean larger harvests down the road.

And because they gradually dissolve in the soil over two months, you can spend less time fertilizing and more time enjoying your pepper harvests.

How to Use Jobe’s Tomato Spikes for Peppers

Follow the same directions on the package for peppers as you would tomatoes. In my case, I do two things a bit differently.

Since some of my peppers are in containers, I don’t always have the space to put the spikes 6 to 8 inches from the stem, and I avoid placing them right on the edge of the container because as it dissolves it can just run down the sides of the container instead of into the soil. So, I sometimes place the spikes 4 to 6 inches away from the stem without a problem.

If you want to up your pepper game, you can combine Jobe’s tomato spikes with other fertilizers. As I mentioned before, you can start your peppers off with an all-purpose fertilizer high in nitrogen, then switch to Jobe’s after a few weeks. You can also amend your soil with other fertilizers such as crushed egg shells for a slow-release calcium fertilizer, or a very light feeding of epsom salt once or twice in the season. Generally, it’s better to underfertilize than overfertilize, but these ones offer micronutrients to your peppers that complement the NPK of tomato spikes.

Why Jobe’s Tomato Spikes Are My Preferred Fertilizer for Peppers

I use lots of different fertilizers in my garden, both organic and the blue stuff, but for peppers, if I had to choose one, it would be tomato spikes.

As mentioned above, they are very easy to use and in my growing season, I just need to apply them twice. Slower release also means less nutrients are washed away, so you’re getting more bang for your buck while not worrying about fertilizer runoff. They are also relatively cheap and easy to find.

If you’re buying Jobe’s fertilizer spikes, you’ve likely seen both Jobe’s and Jobe’s Organics brands. Is one better than the other for peppers?

For peppers in the ground or in containers filled with compost or a mix of soil and potting mix, you can use either one and both will give you excellent yields.

The only situation where I would caution against Jobe’s Organics spikes is if you are growing purely in a sterile potting mix. Organic fertilizers usually require soil life to gradually break them down and release nutrients into the soil. Regular Jobe’s tomato spikes are already in a form available for plants to absorb, so they just release nutrients as they dissolve.