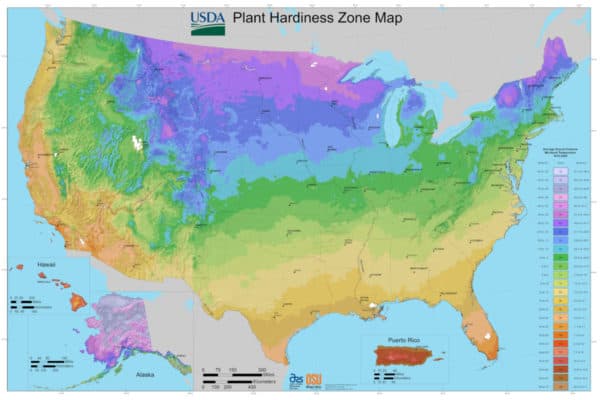 In the northern hemisphere, generally the more north you go, the colder the extreme temperatures. However, this is not always the case. Mountainous areas will have colder winters, central plains will also have colder winters, and while the American West Coast has mild winters, East Coast winters are more frigid.

Why Is Knowing My Hardiness Zone Important?

Knowing what your hardiness zone is can be helpful to know what kinds of perennials (especially flowers, shrubs, herbs, and trees) grow best in your area and whether you should bring them indoors over the winter. Hardiness zones are mostly unimportant for annual flowers and vegetables.

Because plant hardiness zones correspond to the average extreme minimum temperature in an area, you can avoid growing varieties which cannot survive those minimum temperatures. This can be really important if you’re looking for expensive fruit trees to plant in your garden.

If you’ve grown mint, you’d know it’s almost impossible to kill once established. Mint is especially hardy, easily surviving USDA Zone 5 minimum winter temperatures of -10 to -20°F (-23.3 to -28.9°C). Some mint varieties can even survive as far north as Zone 3 (-40°F/-40°C), resprouting the next spring.

Rosemary, on the other hand, is hardy down to Zone 6 or 7 with mulch, but can sometimes survive Zone 5 with ample protection. So, if you’re in Zone 5, it might be better to plant rosemary next to a south-facing wall of your home with heavy mulch around the base of the plant in fall, or grow it in a container and overwinter it indoors.

Grapes are a fixture of Mediterranean gardens, but you don’t need to live in California to grow grapevines as long as you grow cold hardy varieties. For example, green Niagara grapes are hardy to around Zone 6a (-10 to -5°F/-23.3 to -20.6°C), so if you live in northern Minnesota, which is mostly Zone 3, one particularly bad winter can kill off your Niagara grape vines. In this case, you should look for hardier grape varieties like Somerset or Frontenac which thrive in Zones 3a and 3b.

If you’re growing annual flowers and vegetables, hardiness zones are mostly irrelevant, since they will either end their life cycle before the winter or cannot survive any frost, anyway. There is one exception: if your average minimum temperature rarely goes below freezing (like Zone 8 and above), this could let you grow some annual vegetables into winter, and could also let you grow cold-weather crops in the winter without protection, like lettuce and kale. For example, chili peppers are actually perennials but they cannot survive a frost, so in places like southern Texas or Florida, you could grow pepper plants year-round.

For annual flowers and vegetables, it’s more important to look at your first and last average frost dates, which will dictate roughly the length of your growing season and help you decide when to plant them and which varieties have enough time to mature in your garden. The reason why frost dates are more important than hardiness zones for annuals is because places like northern New Mexico and southern Michigan can both have the same hardiness zones, but New Mexico has a much longer growing season.

How to Find Your USDA Plant Hardiness Zone

The USDA website has an interactive plant hardiness zone map that lets you zoom in and find out your hardiness zone. These zones are approximations, so if you live on the border between two zones, it’s usually better to err on the side of caution and consider the colder zone if your choosing things like fruit trees.

Do USDA Hardiness Zones Apply to Other Countries?