You may have heard about oxheart tomatoes or have seen some pictures of them. If you’re not familiar with oxhearts, you may think they are some kind of new variety, but actually, they’ve been around for nearly a century.

Oxheart tomatoes are mid season to late season tomatoes that are similar to beefsteak varieties and just as versatile. Their characteristic large size and pointed bottom resembles that of a beef heart, hence the name.

The shape is due to a mutation that causes the blossom end (bottom) to elongate. It’s debated exactly when oxhearts first appeared, but most sources say they were discovered in around 1925. Since then, through accidental cross pollination and deliberate tomato breeding programs, there are now lots of different oxheart tomato varieties.

Because of their unusual shape and large size, they’ve started becoming more popular among home gardeners looking for alternatives to regular beefsteak tomatoes.

What Makes a Tomato an Oxheart Tomato? 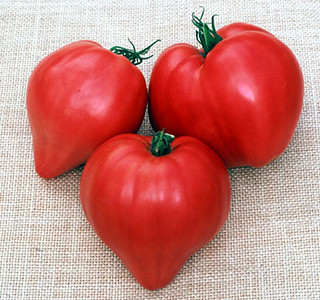 The main characteristic of oxheart tomatoes is their large size and tapered bottom, resembling the shape of a beef heart. They also tend to be very meaty with relatively small seed cavities, similar to beefsteaks, and can regularly grow to over 1 pound, with some hitting the 2-lb and even 3-lb mark.

Besides that, oxhearts vary greatly in color and taste. Most oxhearts are red or pink, but you can find them in yellow, orange, green, and purple just like other tomatoes. Oxhearts also have a range of flavors from acidic to savory to slightly sweet.

When looking to grow oxheart tomatoes, you should know that all oxheart varieties are indeterminate, meaning they will continue growing and producing all season, and will require pruning and support.

However, there are some dwarf varieties, like the Dwarf Purple Oxheart which will continue to grow and produce like an indeterminate tomato but won’t get that tall in a normal growing season. Dwarf oxheart varieties can be easily grown in 10- to 15-gallon containers (although some people have had success with dwarf tomatoes in 5-gallon buckets).

Aside from the shape, I don’t see much of a difference between oxheart and beefsteak tomatoes with respect to plant care or eating. However, oxheart tomatoes are almost always massive and can compete with the biggest beefsteaks. If you love harvesting huge tomatoes, definitely give oxhearts a try.

What Are Oxheart Tomatoes Used For?

Oxhearts make excellent slicing tomatoes for sandwiches and salads, with very meaty flesh with few seed pockets inside, which is my favorite way to use them.

If you end up harvesting more than you can eat, oxheart tomatoes have enough flesh in them to make them suitable for processing and canning. However, because they are not paste tomatoes, they may take longer to thicken into paste/sauce. But the flavor is phenomenal.

Because of their large size, oxheart tomatoes can also be good for stuffing, and you can use their scooped-out, meaty innards to make sauces or add to dishes.

Overall, oxheart tomatoes are incredibly flavorful and versatile in the kitchen.

How Do You Grow Oxheart Tomatoes?

Unless you have a long growing season, sow your oxheart tomato seeds indoors, 4 to 8 weeks before your average last frost date. Transplant outside after night temperatures stay above 50°F (10°C). I always recommend planting your tomatoes deep, removing the lower leaves and burying part of the stem, which will readily grow out new side roots.

Tomatoes are heavy feeders, especially large varieties like oxhearts, so I recommend applying an all-purpose fertilizer to your garden beds before transplanting, or a fertilizer formulated for blooming and fruiting (lower N and higher P and K in the NPK numbers). Tomatoes will also benefit from reapplications of fertilizer throughout the growing season. Typically, liquid plant feeds are applied every 7 to 14 days, and continuous release fertilizer granules/spikes can be applied every 1 to 3 months, but always follow the directions listed for your fertilizer.

List of Oxheart Tomato Varieties (and Where to Get Them)

Since the 1920s, many new oxheart tomatoes have been discovered or developed through tomato breeding programs. Here is a short list of some popular varieties.