Banana peppers are a staple in many gardens and for good reason. Not only are they delicious, but they grow and produce a harvestable crop fairly quickly, in as little as 60 days after transplanting.

Below are common questions and answers related to growing and harvesting and ripening banana peppers (on and off the plant).

How Long Do Banana Peppers Take to Grow?

Banana peppers will start producing harvestable yellow fruit at around 65 to 75 days after transplanting. It may take a few more weeks before yellow peppers begin changing from yellow to their final red color.

Yellow banana peppers are often one of the earliest peppers ready to pick, sometimes even earlier than jalapenos. On seed packets, you will see the listed days to maturity as being anywhere from 60 to 75 days after transplanting. However, this is for the yellow fruits. If you want orange or fully ripe, red banana peppers, you may need to wait 80-90 days after transplanting, or a few weeks after the yellow unripe fruits reach their full size. 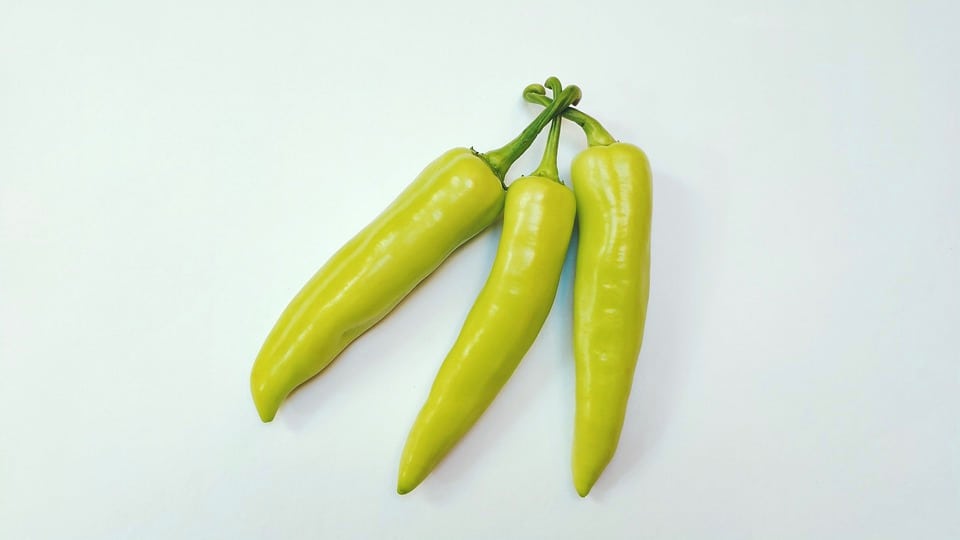 When Is the Best Time to Pick Banana Peppers?

The best time to pick banana peppers is any time after they’ve reached their full size (about 5 to 7 inches long) and have started turning pale yellow. You can leave banana peppers on the plant longer if you want the peppers to develop more flavor and sweetness.

The flavor profile of banana peppers changes as the fruits develop. Full-sized, yellow banana peppers are crisp, very juicy, with a light flavor. As banana peppers ripen, they turn from yellow to orange and then red, getting sweeter and more flavorful.

Banana peppers picked too early will have a noticeable bitter taste. If you pick a banana pepper that looks ready to harvest but is bitter, wait another week before picking another.

While most people pick and eat banana peppers when they’re yellow, banana peppers turn red after fully ripening. They start to change color from pale green to yellow, then to orange and finally bright red.

Although some peppers can turn orange, yellow, mustard green, or even striped when ripe, the final color of most peppers is red, including banana peppers. If you’ve ever eaten pickled banana pepper rings, they appear to come in a variety of colors, but they are all from the same variety of pepper, just at different stages of ripeness.

Not only do banana peppers turn red when fully mature, they also taste the sweetest when ripe.

How Do You Pick Banana Peppers Off the Plant?

The safest way to pick banana peppers is with a pair of sharp garden scissors. You can also twist and pull banana peppers off by the stem if careful not to damage the plant.

Banana pepper stems are thick and sometimes it can be difficult to get them to release off the branch without damaging the plant. Use scissors when possible, but if removing banana peppers by hand, grab the stem and carefully twist and pull upwards.

Will Banana Peppers Ripen Off the Vine?

Banana peppers that are already starting to ripen will continue to change color after being picked. If completely yellow, it’s possible to still ripen off the vine, but it will take much longer and they would likely spoil before ripening. Small, very underripe, green banana peppers will not ripen or develop into yellow peppers.

Unripe banana peppers won’t fully develop off the vine, but if they’ve started ripening, they will continue to change color after being harvested. You can keep your picked banana peppers on the kitchen counter until they completely turn red. Yellow banana peppers may also be able to ripen. However, if they are harvested too early, they could start rotting before they have a chance to ripen.

Like most fruit, banana peppers that are allowed to ripen fully on the plant will have a fuller, sweeter flavor. However, if picked when already starting to ripen, they will still have good flavor if the ripening process finishes indoors.

Can You Use Bananas to Ripen Banana Peppers?

The jury is still out on whether using bananas can ripen banana peppers. Peppers are considered non-climacteric fruit, meaning they need to stay on the plant to reach physiological maturity. However, they do appear to continue to ripen off the plant, and research has shown that the ethylene gas released by ripe bananas potentially plays a role in the pepper ripening process.

Some fruits, like tomatoes, are sensitive to ethylene gas, which is a plant hormone important for the ripening process. This is why you can force harvested tomatoes to ripen faster by putting them in a paper bag or box with some bananas, which release lots of ethylene gas.

Peppers, however, are considered a non-climacteric fruit, which means they need to stay on the plant in order to completely mature. But if you leave a partially ripe banana pepper on the kitchen counter, it will continue to change color. There is a debate on whether ethylene could still speed up the ripening process in peppers.

A few studies [1][2] have shown evidence that ethylene appears to have some impact on pepper color changes when ripening, and part of the ethylene metabolic pathway might be present in maturing pepper fruit.