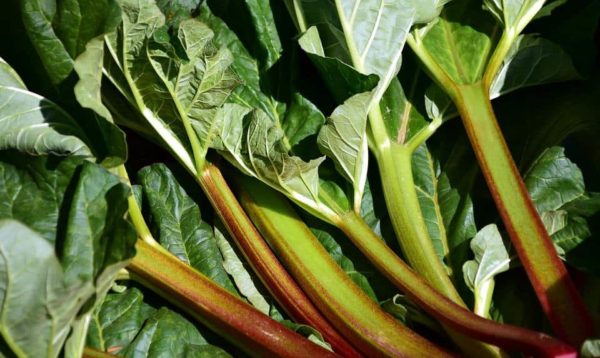 Rhubarb is an extremely hardy perennial vegetable whose broad, majestic leaves and bright red stalks are equally ornamental in both the vegetable patch and the flower garden.

But one common issue gardeners face when growing rhubarb is that the stalks are staying green and not ripening to that red color we associate with rhubarb.

Is it due to a lack of nutrients? Disease or plant stress? Or it’s just not ripening?

Your green rhubarb stalks are almost never the sign of a problem. Many rhubarb varieties naturally have green stalks.

Why Your Rhubarb Is Green and Not Red

Not all rhubarbs have red stalks. If your rhubarb plant otherwise looks healthy and tastes the way rhubarb should, then you have a green rhubarb, it’s likely that your rhubarb is one of the green varieties, which are almost as commonly cultivated as the red ones. Rhubarb can also come in pink or speckled green, so if your rhubarb looks partially red and green, it’s one of the speckled or pink varieties.

Unlike fruiting vegetables like tomatoes and peppers, color has little to do with rhubarb ripeness. Rhubarb is ideally ready to pick when it’s 7 to 18 inches long, depending on the variety.

Some varieties have shorter, thinner stalks, like Canada Red, while others, like Crimson Red, have thick, long, juicy stalks. Glaskin’s Perpetual rhubarb is a speckled green and red rhubarb variety that is mature at around 12 to 14 inches. Riverside Giant is a fully green rhubarb with a huge, 4-foot spread.

Are Red Rhubarb Stalks Sweeter Than Green Ones?

There is no taste difference between green and red rhubarbs, although green rhubarbs are reportedly more productive in the garden, according to UWM Extension.

That said, when cooking rhubarb, if the rhubarb itself is the centerpiece of a dish, you may opt for a red rhubarb variety to get that vibrant color and improve its visual appeal. For dishes where rhubarb is an ingredient that isn’t visible or the color isn’t as important, green rhubarb is perfectly fine to use.

Soil acidity has no impact on the color of rhubarb stalks. That said, rhubarb does grow best in slightly acidic soil, around pH 6.0 to 6.8. However, it can tolerate soil pH as low as 5.0 and can grow in slightly alkaline soil as well. The more alkaline your soil, the more likely you will encounter nutrient deficiencies as minerals are locked in the soil, and this could impact rhubarb color (see the next point).

Can Nutrient Deficiencies Affect the Color of My Rhubarb?

Yes, but not in the way that we think. If your soil is deficient in nutrients, it’s unlikely to keep green stalks from turning red.

If your soil is deficient in nutrients, you may also notice your rhubarb is thin and spindly. However, this problem may be caused indirectly by overcrowding or your rhubarb plant not being established yet.