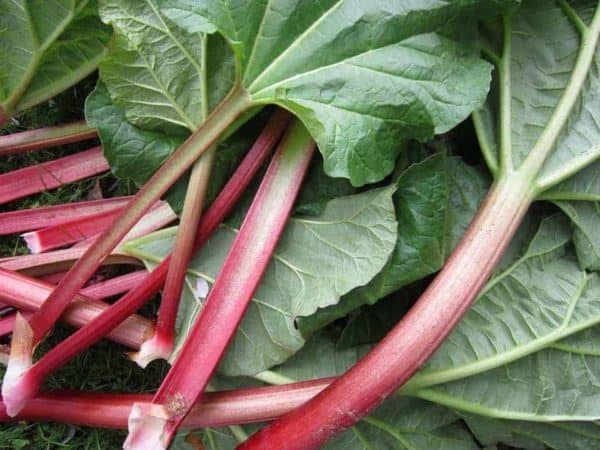 Rhubarb is a perennial vegetable that’s grown for it’s juicy, plump stalks. The stems are tart and sweet, and used in pies, jams, compotes, and other dishes.

Because these stems are only part of rhubarb we can eat (the leaves are toxic) it can be disappointing to see our rhubarb plants growing not-so-succulent stalks.

Fortunately, there are four likely reasons why you’re getting lower yields from thin and spindly rhubarb stalks, which are not difficult to resolve.

Why Your Rhubarb is Thin and Spindly

1. Your rhubarb is getting too large and needs to be divided

The most common reason for rhubarb having thin, spindly stalks is that the plant itself has gotten too large and mature. It seems counter-intuitive, but for rhubarb, a massive plant is the same problem as overcrowding with other plants (which is another cause of thin stalks).

By digging up and dividing your overgrown rhubarb, and replanting each new plant separately, you’re giving extra breathing room for your rhubarb. Rhubarb should be divided every 6 years or so, and it should be done in fall or very early spring.

When dividing rhubarb, each new plant should have a good amount of roots attached in order to ensure it survives transplant shock.

2. Your rhubarb is too young and needs time to get established

The second most common reason for thin rhubarb stalks is that your rhubarb plants are too young. A rule of thumb is that it takes about 2 years before a rhubarb plant is established and grows out full-sized stalks.

This rule applies to newly divided rhubarb plants as well.

3. Your rhubarb is lacking nutrients

Another reason why your rhubarb stalks are on the thin side is that they are lacking enough nutrients. Nitrogen or potassium deficiencies can cause stalks be thin and sparse. Nitrogen is important for stem and leaf growth, while potassium is important for, among many things, growing stronger stems and branches.

If you’ve eliminated the possibility of your rhubarb being overgrown or too young, apply fertilizer around the base of your rhubarb. Any all-purpose fertilizer will work, whether it’s a 4-4-4 organic fertilizer or a conventional 24-8-16 liquid plant food.

For example, a 10-10-10 all-purpose fertilizer can be applied at 1/2 cup per plant, worked into the surrounding soil. Avoid applying fertilizer directly on the crown (central part) of your rhubarb plant. The best time to fertilize rhubarb is in early spring before the main growth starts.

4. The variety of rhubarb you’re growing has naturally thinner stalks

It’s possible that your rhubarb is one of the thinner-stalked varieties, as some types of rhubarb have thicker stalks than others.

In the end, it could very well be a combination of factors causing your rhubarb to be thin and spindly. If your rhubarb variety naturally has medium or slender stalks, and it’s also overgrown and needs to be divided, it might make your stalks seem significantly more spindly than they should be.