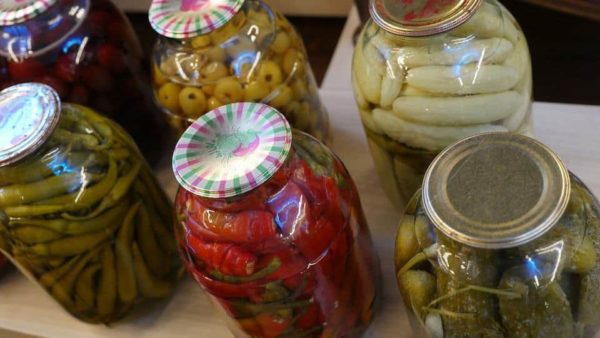 Peppers are one of the most rewarding vegetables to grow. Spicy or sweet, a variety of colors, and with enough sun, space, and nutrients, they can grow into bushy, almost tree-like plants, giving you bountiful harvests every week until the frost comes.

If you were like me last growing season, you had more peppers than you could eat. What are your options if you want to preserve and store your peppers to eat later on or during the winter?

By far, the best ways to store your peppers are drying, freezing, and canning (i.e. pickling). They are easy, almost fool-proof, and can potentially prepare your peppers for years of storage.

The oldest and one of the easiest ways to preserve and store peppers is by drying them.

The easiest way to dry your peppers is by hanging them where there is good air flow and letting them air dry over several days or a few weeks. You can also dry them in an oven on the lowest setting or use a food dehydrator.

If you know you will have a period of several sunny days, you can sun dry your peppers, too.

Slicing your peppers or even cutting a slit into them will significantly speed up the drying process.

Dried peppers can be ornamental, and traditionally have been strung up and hanged in kitchens, serving both an aesthetic and practical purpose.

How to store your dried peppers: For short-term use, you can string them up and use them as an edible decor. For maximum shelf life, though, store in an airtight jar or resealable bag. Keep in a dark cupboard out of direct sunlight and away from moisture. Some people keep their dried peppers in the freezer, but this is not necessary.

How Long Will Dried Peppers Last in Storage?

Dried peppers will last years even if stored in less than ideal conditions. The only thing that will ruin your dried peppers is moisture. If your peppers are completely dry and you vacuum seal them, they even may outlast you.

The easiest (and admittedly the laziest) way to store your peppers is by freezing them.

Not only can you freeze peppers for long-term storage, but you can also freeze peppers as you harvest them throughout the season and then dry them all in one batch when you have enough to fill a food dehydrator or tray in your oven.

Simply take your peppers and either freeze them whole or slice/chop them and freeze them by placing them in a resealable freezer bag, squeezing out the excess air, and tossing them in your freezer.

The disadvantage of freezing peppers is that they will lose their crunchy texture and get soft. But if you want to keep them for cooking, it won’t really matter, anyway.

One tip if you are keeping frozen peppers for cooking is to chop them up to the size you want before you freeze them, since firm, fresh peppers will be easier to cut into small, even pieces than mushy ones. For example, if you’re freezing bell peppers to use in omelettes, you can dice them before sticking them in the freezer and just take them out and use as needed.

Similarly, if you are freezing peppers for stuffing and roasting later, you can scoop them out before freezing so they are ready to stuff in the winter months. Again, keep in mind that they will be soft and have no more crunch.

Works best for: Any peppers you want to use as a substitute for fresh peppers in cooking.

How to store your frozen peppers: Keep them in an airtight, resealable bag in your freezer. There is nothing else to it.

How Long Will Frozen Peppers Last in Storage?

Peppers will last in the freezer indefinitely if they stay frozen the entire time. However, like everything else in the freezer, they may dry out or lose their flavor over months or years.

It’s definitely not the simplest method, and canning seems daunting, but when it comes to peppers, it’s actually a straightforward and safe way to preserve and store your peppers if done properly.

Canning peppers involves pickling it in a solution of vinegar, water, and salt (with optional spices and sugar). Most pickling recipes use 2 cups of white or apple cider vinegar and a 1/2 tablespoon of salt per 1 cup of water.

Because it’s a very acidic solution, you don’t need a pressure canner and can simply can with a water bath.

For canning, the safest, tested recipes are available at your agricultural extension offices, which are an incredible free resource for any kinds of home preservation. For example, CSU Extension gives a good general pickled pepper recipe here.

You can pickle/can sliced peppers, like jalapeno or banana pepper rings, but you can also can whole peppers. If doing the latter, cut a slit in your whole peppers so the pickling brine can get inside.

Here is what you need to get started:

– fresh peppers, whole (with a slit cut into them) or sliced
– pickling solution (as much as you think you will need; ratio of 2 cups white or apple cider vinegar, 1 cup of water, and 1/2 a tablespoon of salt)
– enough mason jars (any size) with metal rings and lids
– a pot of water that is large enough to completely submerge your mason jars with two inches of water above the top

How to pickle and can peppers (basic recipe):

1. Wash and prepare your peppers, either by cutting a slit into whole peppers or sliced into rings.
2. Wash and sterilize your jars and lids by boiling them in water for a few minutes, and leave in hot water until you are ready to can.
3. Bring a large pot to a boil with enough water to completely submerge your mason jars with 2 inches of water above the lid. This can be the same pot you sterilized your jars and lids with.
4. Heat up your pickling solution, adding vinegar, water, and salt.
5. Place your peppers in empty, sterilized mason jars, packed as tight as possible, leaving and fill with your hot pickling solution. Leave 1/4 inch of headspace. You can use a chopstick or skewer to squeeze out air bubbles from between or inside your peppers.
6. Wipe the rim of your mason jars clean and then screw on your pre-sterilized lids.
7. Carefully place your jars in your pot of boiling water, completely submerged with 2 inches of water above the lid, and process for at least 10 minutes (15 minutes if you live at a high elevation). Using canning tongs will make this easier.
Pro-Tip: Although mason jars are very heat-tolerant, you can place a tea towel inside the bottom of your pot of water so the jars aren’t sitting directly on hot metal.
8. After processing, remove the jars and let cool slowly. The lids should pop and stay down once cooled, vacuum-sealing your pickled peppers.
9. Remove the metal ring from your jar lids and store in a cool, dry, dark place.

Works best for: All peppers, but popular favorites include jalapenos, bell peppers, banana peppers, and pepperoncinis.

How to store your canned peppers: Keep your canned peppers in the pantry, cellar, or basement, preferably in a cool, dry, dark place. Remove the metal rings on your jar lids so just the flat part of the lid remains. This will ensure that if the seal is broken or there was a problem during canning which pops the seal, you will notice it right away and can discard it. Once opened, store them in the refrigerator (with a complete lid).

How Long Will Canned Peppers Last in Storage?

Canned peppers can potentially last years, but are at their maximum quality within 6 months. Most guidelines recommend canning about a year’s worth of peppers to ensure best quality and freshness.

Once opened, keep them in the refrigerator, where they should last at least a few months. Use your judgment: if they smell funky, toss them out.

Note: Once again, if in the pantry the seal on the jar is broken on its own, throw out all the contents of the jar. It either means there was a problem in the canning process and possibly dangerous bacteria is growing inside or the seal was broken by something else, which means bacteria could get inside.