Despite its long history of cultivation, winter squash had fallen out of favor for years, but is now seeing a resurgence in interest and becoming a staple again in many gardens.

Squash growers want a variety that tastes good, stores well, and won’t succumb to disease or pests easily. It can be difficult to find one that excels at all three, but you can find winter squash varieties that are best suited to your own climate or your priorities. I’ve divided the list based on these three qualities, but here is the full list:

Some people use their winter squash for decoration, but most of us grow winter squash to eat. Most varieties tend to taste similar, but with some minor differences in terms of overall sweetness or the presence and absence of savory notes.

Texture also matters, and some varieties are grown just as much for their texture as their flavor.

The only disadvantage to growing the three varieties below is that they tend to have a shorter shelf life than the other varieties in this list. 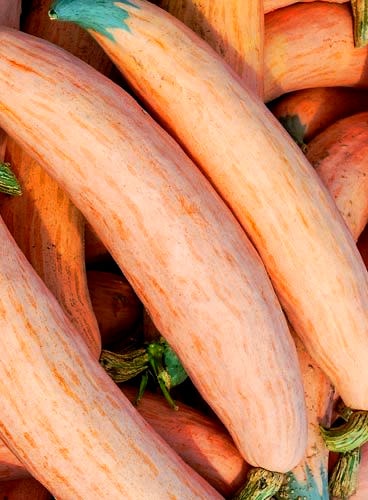 If I had to pick the most delicious winter squash, it would be the Candy Roaster. Originally bred over generations by the Cherokee tribe, it’s still considered one of the best winter squash due to its superb flavor.

Candy Roasters come in many shapes, sizes, and colors, but the most popular ones tend to be more elongated, almost banana-shaped, with orange and yellow-orange inside.

There are now several Candy Roaster varieties, but the sweetest I’ve found is the Georgian Candy Roaster. They can grow up to 10 lbs and they are also full of flesh.

Candy Roasters can be stored for up to 5 months, but can start rotting before then. If they start getting moldy or soft earlier, you can remove the bad parts, peel, clean, and chop up the squash, and freeze them. 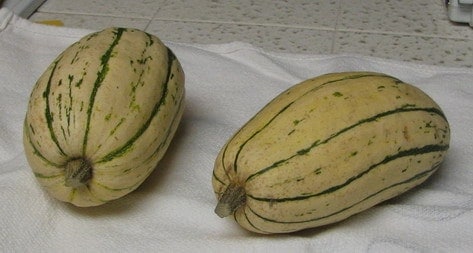 If you enjoy roasting squash, Delicata is the variety for you. If you’ve never seen Delicata winter squash at the grocery store, it’s an oval-shaped, ribbed squash that comes in different colors and sizes.

It’s called Delicata because the skin is very thin and tender. The most common way of preparing Delicata squash is by cutting it lengthwise in half, scooping out the seeds, and then just slicing and roasting them, skin and flesh.

While not as sweet as the Candy Roaster, the Delicata is a reliable producer and can be the star of the dinner table during the holidays.

Delicata winter squash can be eaten right after harvesting, but does taste better after curing and storing for up to a month. They can last up to 3 months in storage, sometimes longer.

Spaghetti squash comes in different varieties but is generally oval-shaped with fairly smooth skin, and doesn’t get extremely large. But what all Spaghetti squash has in common is the super tender fibers inside that look like pasta when scraped out of the squash with a fork.

Good as either a side dish or as part of a main course (I love this 4-cheese Spaghetti squash recipe), this squash is a lot more versatile than just being used as a pasta substitute.

I love all three of these varieties, but which one you grow depends entirely on your taste. For more sweetness, grow the Candy Roaster, for a unique texture, grow Spaghetti squash, and if you want a variety that is easy to cook yet tasty and striking to look at, try the Delicata.

The reason I love growing winter squash is that you can grow way more than you can eat, harvest a heck of a lot of them and just store them in your garage, basement, cellar, or other cool, relatively dry place. No canning, no drying, and no freezing is necessary, but it’s recommended to cure most types of winter squash before storing.

The reason why it’s called winter squash is because you grow winter squash during the main growing season, harvest it in the fall, and then store it for eating in winter.

All the below squash can last potentially 5 months or longer when stored properly. 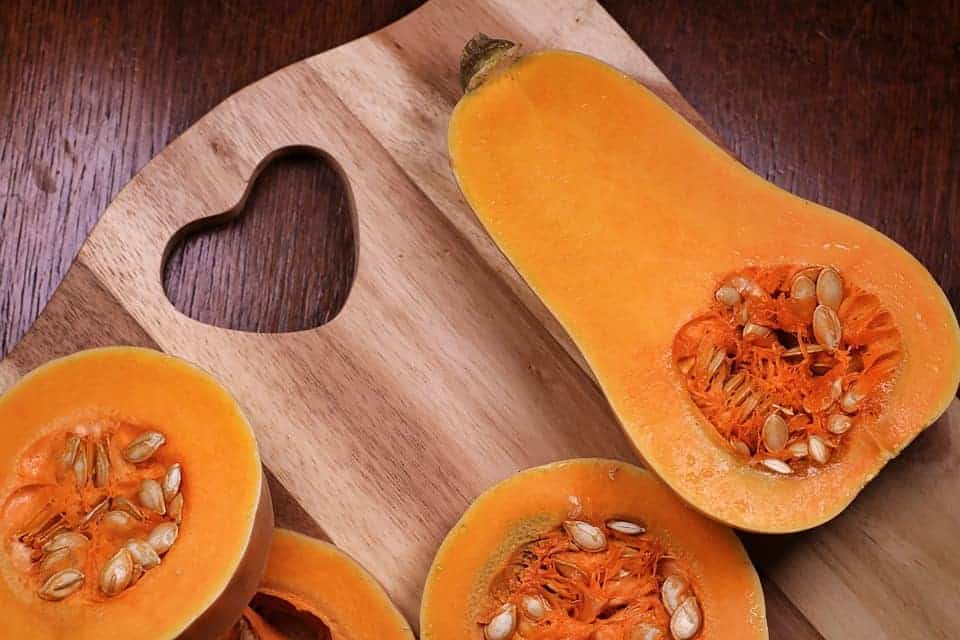 One of the most popular winter squash at the grocery store is also one of the best to grow. Butternut squash has that classic, sweet squash flavor and a lot of flesh with a relatively small seed cavity.

Butternuts are one of my favorite winter squash to eat, but where they really shine is in storage. Butternut squash can easily keep for months in a cool, dry place without spoiling.

There are plenty of butternut squash varieties to choose from, all with excellent shelf life, such as Burpee’s Betterbush, Orange Butternut, Waltham, Waldo, and Butterscotch. 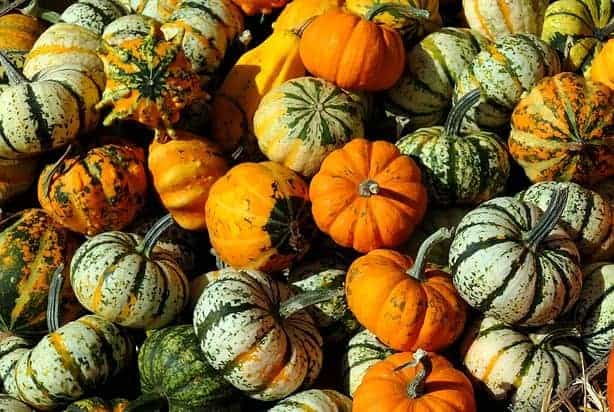 Kabocha is a family of Japanese winter squash. They’re smaller than most squash varieties, and have a roundish, pumpkin-like shape. They are usually green, gray, or brown in color.

The flesh of the Kabocha squash isn’t as moist as other varieties, but that could be the reason why they store so well.

The two best-storing Kabocha winter squash varieties are Cha-Cha and Winter Sweet. In Johnny’s Seeds storage tests, both of them lasted at least 5 months, with Winter Sweet keeping for 6 months. 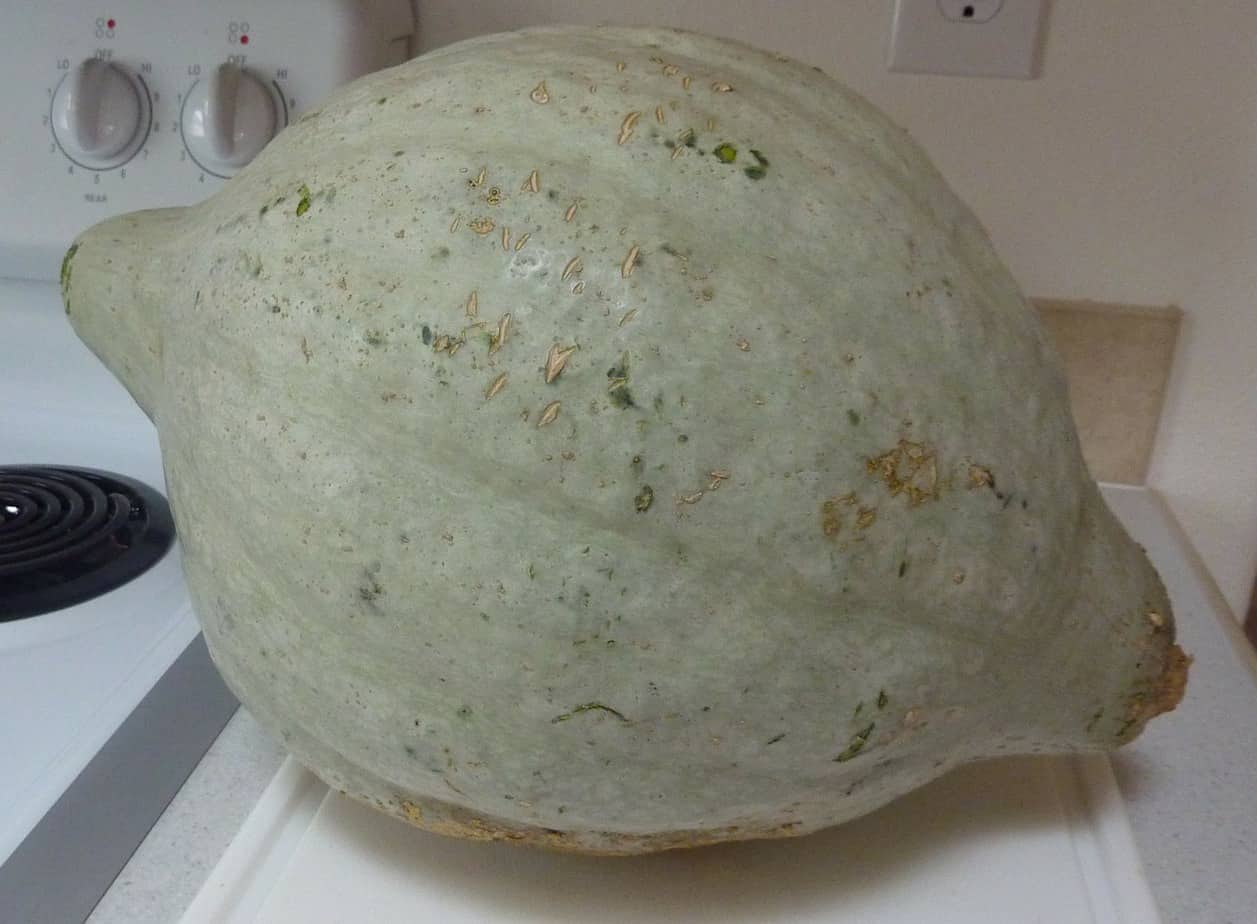 If your main purpose is to grow winter squash for storage, any variety of Hubbard squash is an excellent choice. They are relatively round, almost teardrop-shaped, and tend to have bumpy skin.

The shelf life of Hubbard winter squash is the stuff of legends. Some people have claimed they can last up to a full year. I’ve grown them and eaten perfectly fine Hubbard squash after 6 months, so I don’t doubt some can last even longer. But realistically, expect 4-6 months of storage.

Also, much like Butternut and Kabocha squash, Hubbard will taste better after a month or two in storage, as the squash gradually loses moisture and the sugars inside get more concentrated.

Of these three types of winter squash, I would say Butternuts have the best taste. But if you want to maximize shelf life, grow a Hubbard or Kabocha squash (especially the Cha-Cha and Winter Sweet Kabochas).

While pests and disease can strike winter squash anywhere, if you have really hot and humid summers, you might already know first-hand how devastating they can be.

Given enough time, almost all winter squash will suffer from some disease, especially powdery mildew, but some varieties are much hardier than others.

Researchers in Georgia examined several types of winter squash that could thrive in their wet climate. They found that generally, winter squash varieties of the Cucurbita moschata species tend to have greater resistance to both pests and disease.

Butternut squash are generally don’t get as many pest problems, but the Waltham variety is a tried-and-true heirloom that even does well in the hot, humid South.

Walthams are a standard Butternut that typically grow up to 5 lbs but can occasionally get larger. They are sweet, lending to that kind of squash and sweet potato flavor enjoyed by many squash lovers. Perfect for baking, roasting, and soup. The flesh is relatively smooth. 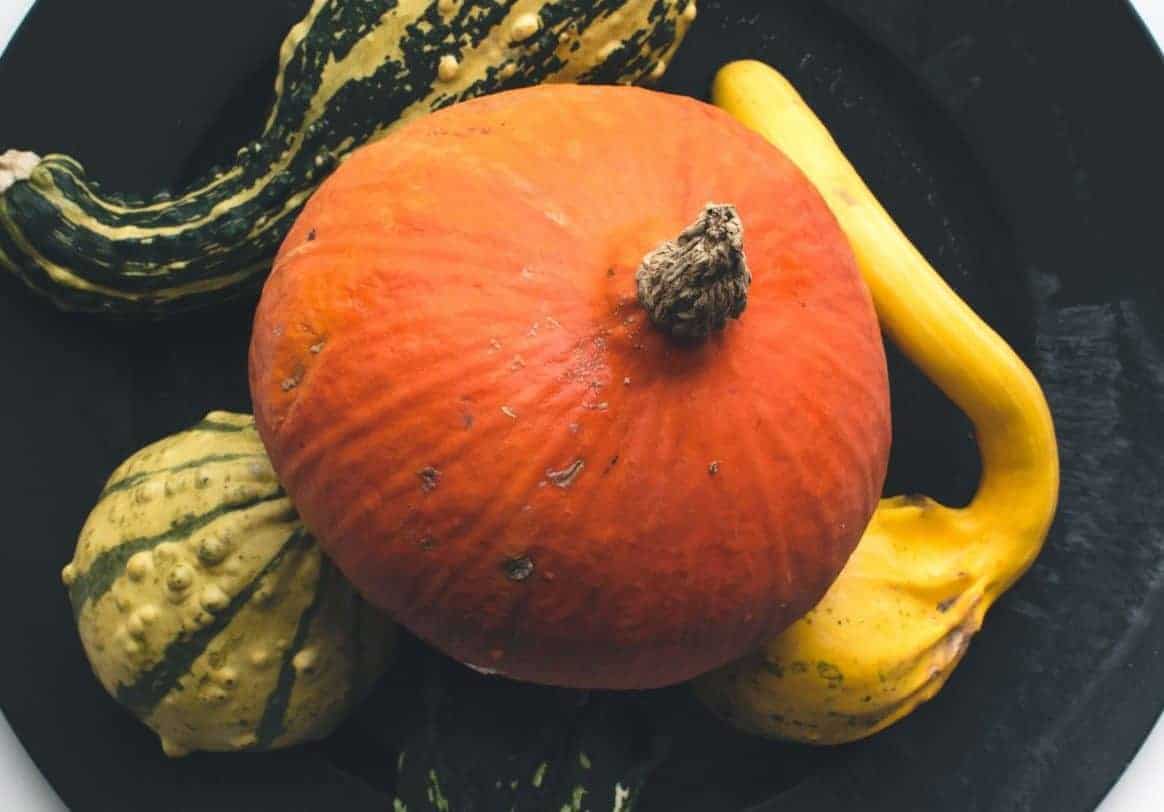 Named after the Seminole tribe which traditionally grew it in Florida, the Seminole pumpkin is a must-grow for the South, and a good choice for other regions that have lots of pest and disease pressure.

Seminole pumpkins look like standard orange pumpkins but with less ribbing on the skin and less vibrant color. The taste is very similar to Butternut squash, and some say it even tastes sweeter.

They tend to attract few pests and show good resistance to powdery mildew and other fungal diseases. Even if they are eventually infected with powdery mildew, they will continue to produce even as other winter squash varieties die off. 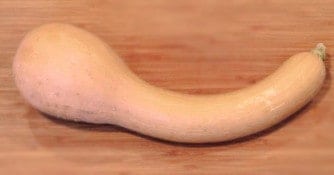 The Canada Crookneck is an heirloom variety of winter squash from New England, dating back to at least the mid-19th century. It looks similar to a Butternut but with a very long fleshy neck, and is actually the ancestor to modern Butternut varieties.

Canada Crooknecks store very well but also have excellent resistance to pests and disease. Northern gardeners report that beetles and vine borers tend to leave them alone, while Southern growers enjoy bountiful harvests without losing their crop to vine borers and squash bugs.

The main draw of this winter squash, aside from the pest and disease resistance, is that you get a lot more flesh per squash. That long neck is solid squash all the way through!

Out of these three, if you’re looking for the best taste, pick a Seminole pumpkin. If you want something that’s all flesh with a small seed cavity, try the Canada Crookneck. If you just want a dependable, all-around good squash, grow a Waltham Butternut.