Hot peppers are one of my all-time favorite vegetables to grow (I know they’re technically a fruit) and many gardeners feel the same way. Some even grow hot peppers almost exclusively. They come in a diverse array of sizes, shapes, colors, flavors, and aromas, and add heat to meals, making them an invaluable spice in the kitchen.

Whether you want to grow indoors during the off-season or you don’t have enough space to grow outside, I’ve been in the same position and I’ve been growing peppers indoors year-round for several years now.

Can I Grow Hot Peppers Indoors?

Growing hot peppers indoors is very easy as long as you have enough light. Light is key for growth but also to stimulate budding, flowering, and fruiting. Container size will dictate how large your hot pepper plants get. Hot peppers can grow in 1-gallon pots or smaller, although it’s recommended to use pots around 2 to 5 gallons for full-sized pepper plants. Peppers grown indoors need less fertilizer than those grown outdoors.

There are a handful of reasons why gardeners grow hot peppers indoors, and I am guilty of all of them.

One reason is if you don’t have enough space outside for hot peppers, either because your garden is already full or you only have limited growing space such as a balcony. I always grow at least a few hot pepper plants indoors even during the summer when I already have peppers in the ground and on my deck. A lot of indoor gardeners live in apartments and grow their own peppers inside so they can have access to some spice all year round.

For others, they want to grow hot peppers during the winter. Guilty. I am diversifying my indoor growing setup to include other vegetables like lettuce and small cherry tomatoes, but the stars of the show are still hot peppers. If you don’t have a greenhouse, growing hot peppers indoors is your only choice. Eating a freshly picked chili pepper in the middle of January with a foot of snow outside is one of life’s pleasures more gardeners are starting to experience.

Peppers are perennials but are frost tender, meaning they will keep growing as long as it’s not too cold. An increasing number of gardeners are pruning and overwintering their peppers indoors. If you want a full guide on how to prune peppers for overwintering, there is no better source than pepper grower and breeder Khang Starr:

Why overwinter your hot peppers? Aside from the prospect of getting another harvest of peppers in winter, your already-established pepper plants will grow much faster and give you an earlier crop of hot peppers in the summer compared to pepper plants you’ve started from seed. Overwintering basically gives you a head start for next year. Just prune your overwintered pepper plants in early spring and take them outdoors when night temperatures don’t go below 50°F/10°C.

Things to Consider Before Growing Hot (or Sweet) Peppers Indoors

If you want to grow hot peppers successfully indoors, the key is giving your pepper plants enough light. I can’t stress this enough. Not having enough light not only means your plans will be leggy and weak, but peppers produce blooms in response to light intensity. Stronger light leads to higher blooms.

Some varieties are easier to grow in low light, such as the Thai Dragon, which can produce loads of peppers for you even under a compact fluorescent (CFL) grow light or a T5 fluorescent shop light. But some, like jalapenos, won’t give you many peppers even if they have lots of foliage. I grew Brazilian Starfish peppers (variable heat and really sweet) indoors under CFL grow lights a few years ago and didn’t even get buds, let alone peppers, but when I took them outside in the spring, they were flowering within a month.

For this reason, I recommend LED grow lights for home growers who want to grow hot peppers indoors if they want to maximize yields.

You do not need to spend a lot of money on lights; for one large pepper plant or 2-3 small ones, you can use a single SANSI 36W full-spectrum LED light bulb, which is pretty cheap. I’ve used them for both starting seeds and growing full-sized pepper plants. I would avoid the cheap $20 USB grow lights, as they are only really good for seed starting and at that point you may as well use a fluorescent which is better.

Popular brands among pepper growers include SANSI, Mars Hydro, Spiderfarm, and Hidden Harvest, but I would avoid larger, expensive lights unless you plan on growing a full indoor garden.

When growing outdoors, I recommend for most varieties to use a 2- to 5-gallon pot, and you can go larger for some varieties like ghost peppers which can grow into a huge shrub if given enough time. But if you only have space for a 1-gallon pot, pepper plants will grow fine, but they will be smaller and produce fewer peppers. See this video about the effect of pot size on pepper growth; you’ll notice that some varieties stay small no matter what, but others will easily adapt to a larger and larger pot size until… watch to the end:

Different chili peppers respond to container sizes differently. Jalapenos, in my experience, put out much fewer pods when constrained in a small pot (1 gallon or smaller) whereas Thai varieties, like the Thai Dragon, can still produce loads of peppers even in a smaller pot. Here’s an example of an even smaller Thai birdseye pepper which is growing comfortably in a tiny 2-inch pot. 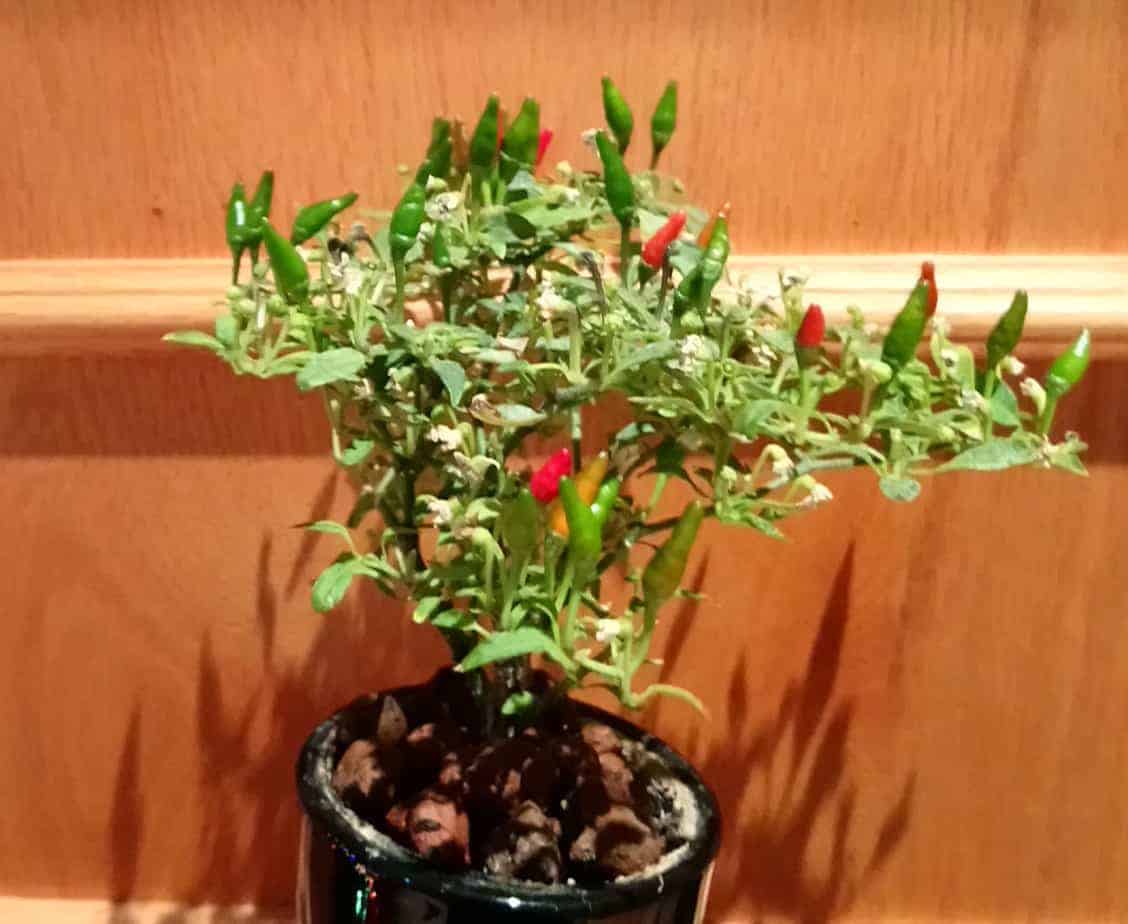 Although one of the quintessential summer vegetables, second only to tomatoes, peppers don’t like extreme heat, and too much heat (especially above 90°F/32°C during the day or above 75°F/24°C at night) can cause serious problems.

So, while you may be tempted to put your pepper in the hottest part of your home, peppers grow optimally at standard room temperatures. You can even keep peppers next to a south-facing window with supplemental light during the cold winter months.

If you are only overwintering just to keep them alive until spring, you can get away with lightly fertilizing once or twice in the winter months. For those who want to get good yields, you can use a slow release fertilizer like Jobe’s tomato spikes for peppers and reapply it after two months, or use a liquid fertilizer like Miracle-Gro but instead of fertilizing every 1-2 weeks, do it every 2-4 weeks.