Kale is a staple in many gardens, truly beats the heat in the summer and continues to thrive (and taste even better) in the colder months.

If you’ve grown kale for a while, you may wonder if you can prune it, especially when it starts growing tall. Some gardeners prune the top of their pepper plants early in the season to promote bushy growth, and it’s recommended to prune tomato suckers. So what about kale?

Yes, you can prune kale. While it’s not a common practice, some gardeners swear by it. There is a reason why this is titled “simplest guide” because it really is that easy.

Will Kale Grow Back After Pruning? 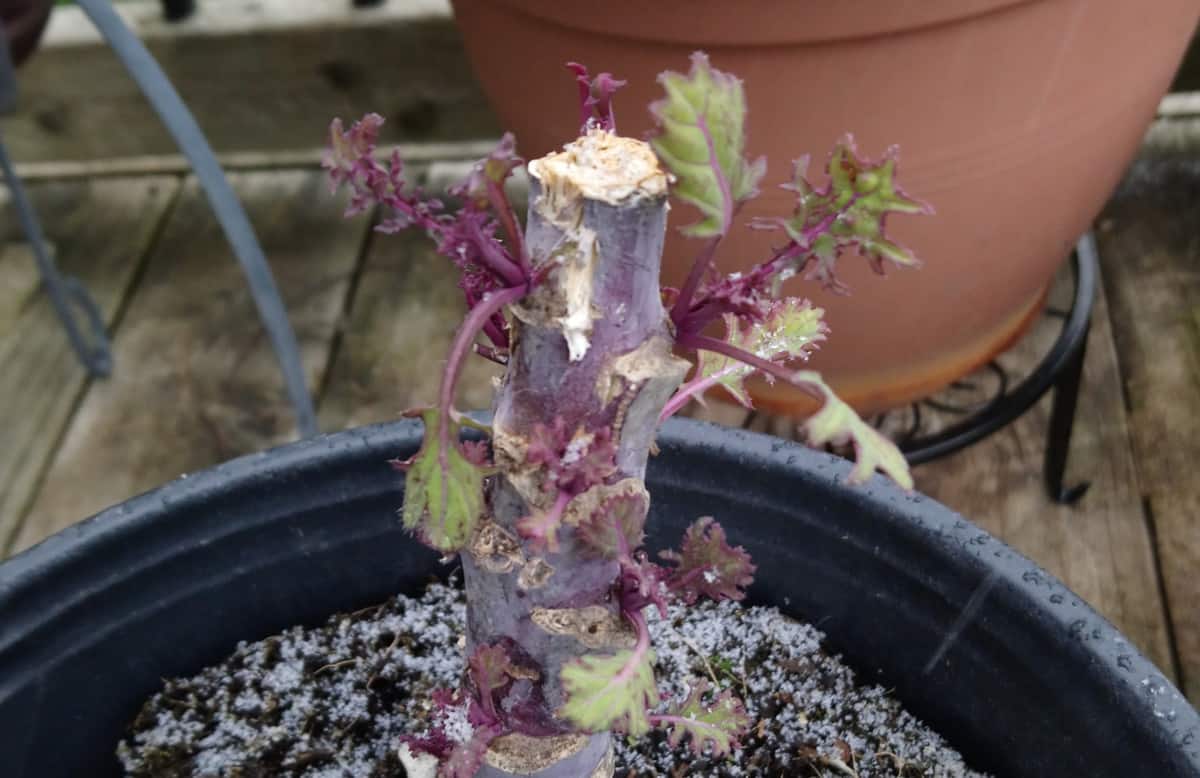 Kale will grow back after pruning, however, it won’t grow from the top, but rather grow side shoots right above the nodes of previously fallen/cut leaves.

If you harvest kale using the cut-and-come-again method, you will notice that your ever-growing stalk of kale has scars where the old leaves were removed. When you prune the top of your kale plant, that will trigger new shoot growth on the nodes above those scars on the stalk.

Should You Prune Kale?

You don’t need to prune kale. However, there are some situations when it’s warranted, such as when the upper leaves are infested with pests and it’s too late in the season to plant more kale seeds. It’s also a good way to get more growth out of container-grown kale.

By pruning instead of replanting, you will be able to get a faster harvest before the end of the growing season. But there is one disadvantage: the overall yields tend to be lower because the new side-growth leaves tend to be smaller on average.

Because of this, if it’s mid summer or earlier, it’s often better to replant kale instead of pruning it.

Note: If you’re growing a perennial variety of kale (most kales have a 2-year biennial life cycle), pruning it in spring can rejuvenate its growth and help it keep a bushy growth habit.

Another note: If your kale is starting to bolt (produce a flower stalk), pruning it won’t stop or slow down the bolting process. However, kale flower buds can be cooked and eaten like broccoli, and bolted kale is less bitter than other bolted leafy greens like lettuce and spinach, so you may want to “prune” it anyway!

When to Prune Kale

Kale can be pruned any time, but most gardeners who prune their kale do it when the yield is declining later into the season. Instead of removing the kale plants, they will just prune them so they can start growing back.

As mentioned in the previous section, after pruning kale, the new growth typically will be smaller than full-sized leaves. But if it’s late in the season, it might be worth pruning instead of sowing another crop, since the existing, mature roots will be able to support faster growth of new shoots compared to seedlings. Alternatively, replacing one large, old kale plant with a few rows of late-season baby kale could also be worth trying.

How to Prune Kale

Pruning kale is not generally advised, but there are benefits to it. It’s a way of salvaging an infested kale plant, and get a quick crop of smaller, but still tender leaves late in the season. Try it out with some of your kale and see if it’s worth it in your garden.