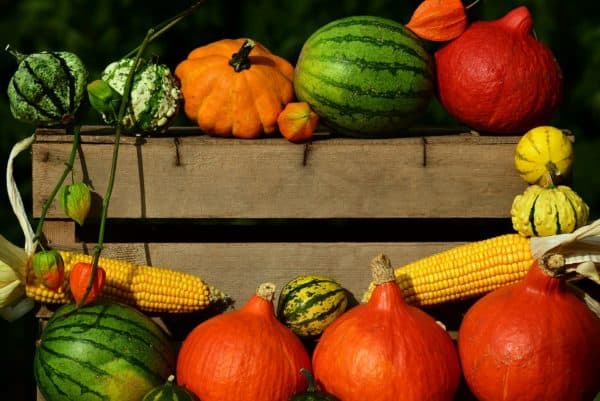 Cucurbits are one of the most popular families of plants grown in many gardens. This family consists of cucumbers, winter and summer squash, cucamelons, gourds, and various melons. Even the loofah (Luffa) you use in the shower is the mature, dried out skeleton of a fruit from a cucurbit.

If you’re growing at least one kind of cucurbit, you’re probably growing more, and because of the way cucurbits are pollinated, there’s a concern about whether certain kinds of squash or melons can cross-pollinate. Fortunately, it’s very easy to tell if two varieties can cross-pollinate or not, as explained below.

Can Cucumbers Cross-Pollinate with Cantaloupe and Watermelon?

Cucumbers cannot cross-pollinate with cantaloupes, watermelons, or any other melons. Cucumbers (Cucumis sativus) are a different species from cantaloupes (Cucumis melo) and watermelons (Citrullus lanatus) and are therefore not compatible with each other.

Because cucumber pollen is not compatible with cantaloupes and watermelons (and vice versa), you can plant them near each other without risk of cross-pollination.

Note: There is a variety of cucumber called Armenian cucumber, which can cross-pollinate with cantaloupes (but not watermelon). This is because Armenian cucumber is not a true cucumber, but rather a melon (Cucumis melo) which grows long like a cucumber and is harvested when young.

Can Cucumbers Cross-Pollinate with Winter and Summer Squash?

Even zucchini, which seems to be closely related to cucumbers, won’t cross with cucumbers.

Do Watermelons and Cantaloupes Cross-Pollinate?

Despite having a similar growth habit and flowers, cantaloupes and watermelons don’t cross-pollinate. They’re of completely different species; cantaloupes are Cucumis melo, while watermelons are Citrullus lanatus.

Similarly, other melons (such as honeydew, ananas melons, etc.) do not cross-pollinate with watermelons.

Can Cantaloupes and Honeydew Melons Cross-Pollinate?

Cantaloupes and honeydew melons can easily cross-pollinate. They are both different varieties of the same species, Cucumis melo.

All varieties of the Cucumis melo species can cross-pollinate, and it includes a lot of different types of melons (but not watermelons). So cantaloupes and honeydew melons can cross-pollinate with ananas melons, Galia melons, Canary melons, snap melons, Casaba melons, Tiger melons, Kajari melons, Armenian cucumbers (which are actually a melon) and more. Some people will cross these melons with each other on purpose to make new varieties.

Will Winter and Summer Squash Cross-Pollinate?

Most winter and summer squash can cross-pollinate, depending on the species. Squash of the same species can easily cross-pollinate, while those of different species cannot. The majority of squash grown in home gardens are of the Cucurbita pepo species. It includes most summer squash, including zucchini, and many winter squash varieties such as pumpkins, acorn squash, spaghetti squash, and delicata squash. However, winter squash of different species, such as Cucurbita moschata (Butternut Squash, Korean Zucchini, Crookneck Squash, etc.) and Cucurbita maxima (Buttercup, Kabocha, Hubbard Squash, etc.) will not cross-pollinate with any C. pepo squash.

Cross-pollination does not affect your squash plants or fruit at all. However, if you save the seeds of a cross-pollinated squash and plant them next year, you will end up growing a hybrid of both parents and it will have different fruit.

Can Zucchini and Pumpkin Cross-Pollinate?

Surprisingly, zucchini and pumpkins are the same species, Cucurbita pepo, which means they can and do cross-pollinate.

How Can I Keep Squash and Other Cucurbits from Cross-Pollinating?

The only way to guarantee no cross-pollination between cucurbits is to grow in a greenhouse (with no insect pollinators) or cover the female flowers before they open (ideally with a breathable mesh bag), and manually pollinate them with male flower pollen from the same variety after the female flower opens.

The recommended distance for isolating squash varieties from cross-pollination is 1500 meters (1640 yards), but this is a recommendation for seed producers, where there are potentially thousands of squash plants per acre. In reality, if you’re growing a few zucchini plants and you have a neighbor growing some pumpkins a block away, it’s unlikely that cross-pollination will happen. Cucurbit female flowers are only open for a short period of time, often opening early in the morning and closing up by the afternoon, so there is a limited time window for a bumblebee to fly from your neighbor’s pumpkin patch to your zucchini, which would need to have male and female flowers open in the same morning.

The cucurbit family (Cucurbitaceae) is a large family of plants with hundreds of species, some of which are important food crops. For the gardener, there are two important things to know about the cucurbits.

Cucurbits mostly have a vining growth habit. Whether they sprawl out in long, branching vines like cucumbers and watermelons, or grow along a compact, vine-like stem like zucchini, expect cucurbits to grow like a vine. That means they will often need support or a lot of space to grow along the ground. For zucchini and compact bush squash, you can get away with no support or a simple stake. For cucumbers, it’s usually better to grow them vertically. Most melons and winter squash are grown along the ground, but you can grow them on a trellis. Just add extra support around each melon to keep them from falling off the vine.

Cucurbits have separate female and male flowers. Unlike tomatoes, peppers, and other garden vegetables, cucurbit flowers do not self-pollinate, since the male and female parts are on separate flowers. Cucurbits are typically monoecious, meaning they have separate male and female flowers on the same plant. That means they need pollinators to transfer pollen from the male to female flowers. You can also pollinate your cucurbits manually. Alternatively, you can grow parthenocarpic varieties, such as parthenocarpic cucumbers and zucchini, which do not require pollination to produce fruit.

Main Species of Cucurbits in the Garden

As mentioned above, only cucurbits within the same species can cross-pollinate. However, there are lots of different species that are commonly grown in the garden. Below are some of the most common cucurbits.