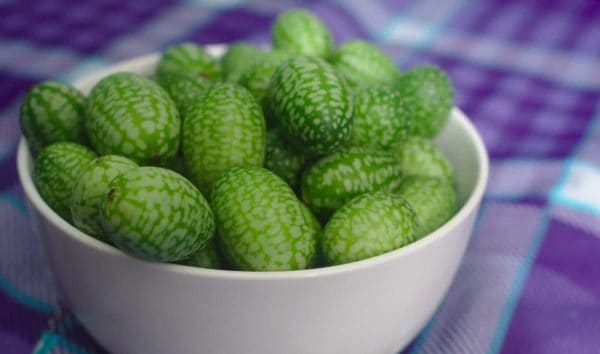 Cucamelons, also called Mexican sour gherkins, are adorable little fruits that look like baby watermelons. Inside, though, they look more like a cucumber and taste like a slightly sour cucumber.

Cucamelons are becoming a popular addition to gardens because of their size and taste, their prolific production, and better pest and disease resistance compared to cucumbers. If you want to grow cucamelons, you may wonder if they need to be pollinated to produce fruit like cucumbers do.

Cucamelons, as the name suggest, are related to cucumbers and melons, and all are in fact part of the same family called cucurbits.

The problem arises when you have only male flowers or only female flowers open at the same time, or when you don’t have many pollinators in your garden to help you out. Fortunately, there are ways to increase pollination success and the size of your harvests.

How to Increase Pollination Success

Pollinators like bees will go from flower to flower on the same plant to collect nectar and pollen, and they can tell when they’ve visited a flower (although I’ve seen a few go for seconds). The more cucamelon plants you have, the more likely you will get male and female flowers open at the same time. So, while you will obviously get omre cucamelons overall, you will also get more cucamelons per plant.

It’s recommended to grow at least 2 or 3 cucamelon plants at the same time. They don’t have to be right next to each other but should be close by so they will all be part of the bees’ daily rounds.

2. Attract More Pollinators to Your Garden

Everyone should be attracting more beneficial insects to their garden. Pollinators do their obvious job and predatory insects like wasps and ladybugs will eat pests out of your garden.

While bees love bright yellow cucamelon blossoms, you can plant more flowers in your garden to attract them in greater numbers. Zinnias, marigolds, cosmos, and various herbs are irresistible to bees and bumblebees. Purple, yellow, and blue are the most attractive colors for bees.

Among the many benefits of growing sunflowers, attracting pollinators is one of them. Each sunflower is actually a compound flower composed of hundreds of tiny flowers which each produce a seed. To a bee, a sunflower isn’t like a giant cake, it’s more like a giant pile of fresh donut holes. Also, even pollen-free sunflowers still have nectar and will attract bees.

The only way to virtually guarantee pollination is if you roll up your sleeves and do it yourself. I don’t usually recommend manually pollinating all your cucamelons since it can get tedious, but you can definitely do it.

Once you pollinate your cucamelons a few times, it will be very easy and can be part of your morning routine. All you need is a brush or cotton swab, but even those aren’t necessary.

How to Manually Pollinate Cucamelons

1. Find at least one open female flower and male flower. Female flowers are identified by the tiny immature fruit behind them, whereas male flowers just have a stem. It’s important that both flowers are open. The best time to find open flowers is early in the morning.

3. Take either the removed male flowers or the pollen-laden brush/swab and dab them in the center of every open female flower you can find. You don’t need much pollen to successfully pollinate, but try to get pollen all over the top of the stigma (central part of the female flower).

That’s all. If your female flowers have been successfully pollinated, the tiny immature fruit will start growing into a full-sized cucamelon. You can also use this approach with any cucurbit vegetables like cucumbers, melons, winter squash, and zucchinis, too.