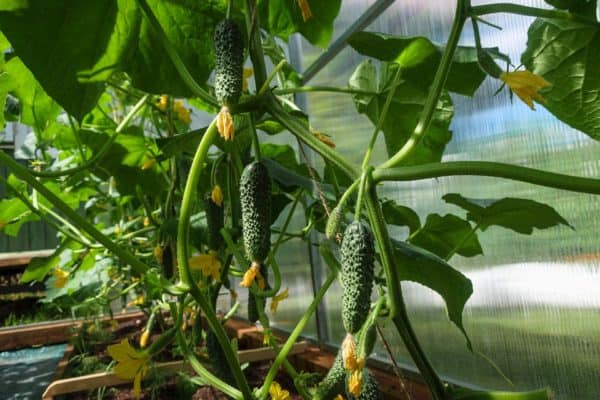 Cucumbers are one of the earliest and most productive summer vegetables to grow in your garden, and they also make excellent use of vertical space. However, some gardeners who start growing cucumbers may notice their cucumbers don’t actually climb and just kind of flop on the ground, despite them being described as a climbing vine.

The truth is that cucumber plants are natural climbers, but they need a little help to keep them climbing up a trellis, especially in the beginning. Training cucumbers might seem daunting for a first-time grower, but once you know how cucumbers climb, it’s very easy to do, and you can apply the same idea to other climbing vegetables with tendrils like peas and small melons.

Do Cucumber Plants Climb on Their Own?

As cucumber plants grow, their long, thin tendrils will slowly wrap around whatever they come into contact with. If they don’t come into contact with anything, they won’t be able to grab on and help the growing cucumber. You will periodically need to weave your cucumber plants along your trellis if they start falling away from the trellis, but once they have that initial support, they can usually be left alone to grow by themselves.

What Should Cucumbers Climb On?

Cucumbers should climb on a trellis or trellis-like structure. Any structure with horizontal, vertical, or diagonal intersecting pieces is ideal. This could be a traditional wooden trellis, a metal fence, cattle panels, an arbor, stakes with twine tied between them, strings hanging from an overhead horizontal bar, or even poles tied into a teepee shape. There are many options for growing cucumbers on a trellis.

Because of the way cucumber tendrils grow, your cucumber plants can (and will, if close enough), grab onto each other or even other plants as they climb. Some people will purposely grow a row of sunflowers just to let their cucumbers climb along them. This is not always recommended, as for some disease-prone plants (like tomatoes) having a cucumber growing all over them can reduce air flow around the plants, making it easier for diseases like tomato blight to infect the leaves.

You can grow a cucumber on just a tall stake, but it will be harder for the cucumber to climb on its own and you will need to tie it up as it grows, similar to staking zucchinis or tomatoes. This is because it’s harder for the tendrils to find the stakes on their own and wrap around them.

How Do You Train a Cucumber Plant to Climb?

When we say “training”, we don’t mean forcing your cucumbers to do chin-ups. Training a cucumber requires gently weaving or flipping a growing cucumber plant around or through a trellis to help the tendrils “find” the trellis and grab on. However, you may need to add extra support with string, garden tape, or zip ties. Training is mainly required in the beginning to help the cucumber get that initial support so it can grow and climb in the right direction.

Pro-Tip: You don’t always have to train your cucumbers to grow upward. If you have a short but wide trellis, you can weave your cucumber plants horizontally as well. You can also grow cucumbers on an arbor, training them to climb up and over the arch.

Can I Grow Cucumbers Just on the Ground Without Support?

You can grow cucumber plants on the ground without support, but it’s not recommended. It’s better to grow your cucumbers vertically because it keeps the cucumber fruits themselves off the ground, away from ground-dwelling insects and rodents. It also saves space, allowing you to grow an extra row of shorter plants in front of your cucumbers.

How High Do Cucumbers Climb?

In reality, the height of cucumbers depends on the growing conditions, disease, and length of the growing season. In temperate climates, cucumbers start slowing down by late summer due to the high heat taking its toll, and that’s also usually when the first signs of disease set in. So, while your cucumbers may potentially reach 6 feet tall, some gardeners get away with 4-5 feet of vertical growing space. Also, as mentioned above, you could train your cucumbers horizontally along a trellis if you run out of vertical space.

Do I Need a Trellis for Bush Cucumbers?

Bush cucumbers can grow on a trellis but they don’t need it and it’s recommended to save your trellis for other climbing vegetables.

Due to their size, bush cucumbers can be grown in a tomato cage or with 1-2 stakes for support. Since bush cucumbers are not great climbers, they may need tying up, especially if using stakes.