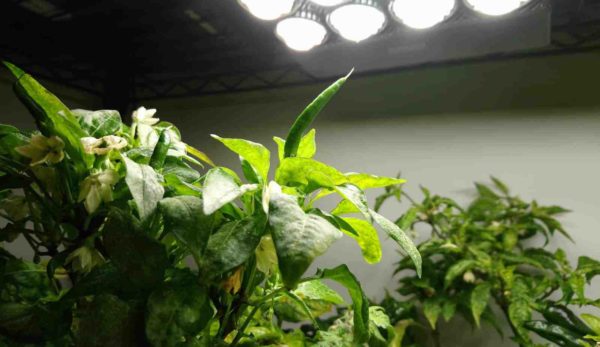 Whether you live in an apartment, have limited space in your yard, or you’re just looking for something to grow during the winter months, you can easily grow chilli pepper plans under lights indoors.

Not only is growing chilli pepper plants under lights possible, but for some people it’s their preferred way to grow them.

But to grow chillies successfully under lights, you need the right lights with enough intensity to support the heavy growth of pepper plants.

How Much Light do Chilli Plants Need?

Using indoor grow lights, chilli plants thrive with at least 12 hours of light per day, ideally a 12 to 16 hour photoperiod with 8 to 12 hours of darkness.

Peppers thrive in full sun outdoors, so they need a lot of light to grow well indoors. Specifically, stronger light will ensure stronger vegetative growth and more blossoms and fruits, while the hours of light per day (photoperiod) will dictate how quickly your pepper plant will grow.

Different types of chilli pepper plants require different levels of light to produce peppers. For instance, if growing jalapenos or habaneros under regular fluorescent lights, you may see healthy leaf and stem growth but few flowers and peppers. However, under the same lights, a Thai chilli pepper (which fruits under less intense light) could produce dozens of peppers.

Pro-Tip: When hooking up your grow light, use one of those cheap indoor grounded timers so you don’t have to manually turn your lights on and off. If you have a time-of-use electricity provider, you can time your lights to go on during off-peak times to save on your electric bill.

Most plants grow best with at least a few hours of darkness per day, including pepper plants. Fortunately, pepper plants are not too picky, and unlike some plants, flowering/fruiting occurs independent of the length of day.

Peppers do not produce flowers based on the amount of sunlight they get, so they will produce whether they receive 12 hours of light or 24 hours of light per day. However, there are significant diminishing returns on giving pepper plants more than 16 hours of light per day. To save on energy costs, stick to a maximum photoperiod of 16 hours. It’s much more cost-effective to use a slightly more expensive full-spectrum LED grow light for 16 hours than an equal-wattage fluorescent grow light for 24 hours.

Can Pepper Plants Get Too Much Light?

For pepper plants, there is no such thing as too much light, in terms of both day length and light intensity. However, moving pepper plants from indoors to outdoors requires a gradual period of hardening off to get them used to the more intense sunlight, and for indoor grow lights, the heat (rather than light) can be an issue.

As mentioned earlier, peppers are not really sensitive to the length of time under light. They can even grow in 24-hour light, although it’s not cost-effective when growing chillies under grow lights. Similarly, peppers bask in unfiltered direct sun, which is far more powerful than any grow light you can buy, so they can’t get too much light indoors or outdoors.

There is an exception, which is when you bring pepper plants outdoors after having them grow indoors. Pepper plants that have been growing indoors need to adapt to the much more intense sun or else the leaves will start to bleach in the intense sunlight.

Hardening off your pepper plants involves giving them a little bit of exposure to the sun, wind, and elements outdoors over several days, up to two weeks. One way to is give them some early morning or late afternoon sun for an hour, then take them back inside, and repeat it every day while gradually increasing the hours outside.

When growing indoors, too much light is nothing to worry about, but always be aware of the heat coming off your lights. Keep lights close to the top of your chilli plants to maximize light exposure but at least a few inches away to avoid overheating them. If you notice the top leaves are starting to turn yellow and crispy, move your lights a bit higher.

Do Chillies Need Light to Germinate?

Chilli pepper seeds do not need light to germinate, although they can sprout in partial darkness. However, after they germinate, the sprouts should be immediately placed under grow lights or a sunny, south-facing window.

While some seeds require light to germinate, most most seeds don’t require any light and in some cases require darkness to germinate properly. The only benefit of lights before germination is to keep the soil warm before your chillies germinate. After that, though, the sprouts will need light to grow.

When choosing grow lights for chilli pepper plants, you want something that is intense enough to support not only growth but blooming and fruiting, cheap enough to not break the bank, and efficient enough to be cost-effective over the growing “season”.

For most home pepper growers, there are two types of lights which fit these requirements: fluorescent grow lights and LED grow lights.

The advantages of using fluorescent grow lights are that they’re easy to find, relatively cheap, and relatively efficient.

The disadvantage of using fluorescent lights is that they tend to be a lower intensity than their LED counterparts. They still excel for starting seedlings, overwintering pepper plants, and growing some low-light-tolerant pepper plants like Thai chillies, but you will notice better yields under LED grow lights.

LED grow lights have come a long way over the past 5 to 10 years. Prices have gone down significantly and they are even more efficient than they were a decade ago.

As an example of how efficient LED grow lights can be, I grew a small hydroponic watermelon plant using only two SANSI 36W full-spectrum white bulbs. One of those bulbs can support one full-sized pepper plant. I’ve used both SANSI and Mars Hydro brands with good results, but there are many reputable brands such as Hidden Harvest and Spider Farmer.

The disadvantage of using LED grow lights is that the upfront cost is higher than fluorescent lights, but to grow one full-sized pepper plant, you only need to spend between $30 to $100 on an LED grow light, and it will last for years. My old “blurple” Mars Hydro grow light is still ticking after four years of year-round use.

Can You Grow Chillies Indoors All Year Round?

Chilli pepper plants are perennials, meaning you can grow them indoors all year round if they have enough light.

As mentioned earlier, chilli pepper plants are not sensitive to day length or season when it comes to producing fruit, so they will give you multiple flushes of peppers throughout the year.

Do You Need to Prune Indoor Chilli Pepper Plants?

While you don’t need to prune indoor chillies, it’s good practice to prune back the branches after each major flush of peppers to promote new growth (including more buds, flowers, and fruit), more branching, and get an overall bushier and stronger plant.

It’s not difficult to prune indoor chilli pepper plants; cut back branches and new growth will appear at the nodes or “joints” along the branches. You can even prune everything back down to the main stem and new branches will grow from the nodes along the stem. However, even just a “hair cut” of cutting the tips of branches all around the plant is enough to spur new growth.

After a heavy pruning, chilli pepper plants will need less water and fertilizer as they recover before putting out new shoots.