Leeks are my favorite of the alliums, also known as the onion and garlic family. They’re mild yet flavorful and you can get a lot from one leek. Leeks are versatile as an onion subsitute but can shine as the star of the meal, like with potato and leek soup, or crispy fried leek strips. If you’re limited on space or just want to try growing vegetables in pots, I’d pick growing leeks over onions any day.

Leeks are well-suited to growing in pots. Guidelines suggest spacing leeks 7 inches (20 cm) apart, but they can be packed closer when growing in pots, down to 2 inches (5 cm) but the less space you give them, the smaller they will grow. With good potting mix and adequate nutrition and watering, you can grow at least five leeks in one 10-inch (25-cm) pot to a decent size. Sow your leek seeds 8-10 weeks before your last frost and transplant after your last frost date. After transplanting, you can sow a second batch of leeks for a fall/winter harvest.

Container Size and Spacing for Leeks

When leeks are planted in the soil, it’s recommended to space single leeks about 7 inches (20 cm) apart. Since I’ve seen a guy successfully grow ten leeks in a single 10-inch (25-cm) pot, I no longer follow that advice whether I’m planting leeks in pots or in the ground.

Here’s the video of someone harvesting ten leeks from a 10-inch pot. I don’t normally recommend this, and you do have to be careful when harvesting as all the roots are tangled together, but it absolutely works and it’s changed the way I grow leeks.

In a pot, you can grow leeks with as little as 2 inches of space between them, however, your leeks will be on the smaller side. You can even see in the video above, some of his leeks are massive, full-sized leeks, but some are a bit skinny. If you have the space, give them 3-4 inches between each one.

In my own experience, I’ve successfully grown 5-6 decent-sized leeks in a 10-inch pot. I have seen some people grow one leek in a small 6-inch pot, but that definitely requires more frequent watering.

Make sure you always use a light, well-draining potting mix and your pot has adequate drainage holes on the bottom.

Leeks grow best in full sun, but can tolerate partial shade. Shade will cause them to grow more slowly, prolonging the time to harvest. Growing leeks in a pot means you can put them in the sunniest spot of your yard, deck, or balcony.

Leeks are biennial plants, meaning they flower in their second year, after a long cold period, so there is virtually no risk of a leek bolting (producing a flower stalk) in the middle of summer, unlike other cool weather crops like radishes and lettuce.

When to Sow and Transplant Leeks

Leeks vary greatly on their days to maturity, with some varieties maturing in 65 days and others taking up to 140 days, but on average, it should take 90 to 120 days until harvest. What that means is that if you want to harvest them in the late summer, you need to start them indoors early. A good rule of thumb is to sow your leeks around 8 to 10 weeks before your average last frost date.

Use a bright fluorescent light like a T5, or get an LED grow like like one of the SANSI lights so your seedlings have enough light to give them a head start.

After your last frost date, you can transplant them into their final container. I like to start all my leeks in one pot or seed tray, sowing more seeds than I need. Then I very gently tease them apart and transplant them. Alliums (onions, leeks, etc.) all have tough, fibrous roots, so they can handle the transplant shock well.

At this point, after transplanting, you could sow more seeds and then transplant another two months later for a late fall, early winter crop.

How to Fertilize Leeks

For organic options, I prefer Gaia Green’s 2-8-4 organic fertilizer and some blood meal (15.5-0-0) mixed into the soil when transplanting. You can also periodically apply fish emulsion, which is a powerful natural fertilizer but has a strong fishy smell. If you have compost, top dressing with a little more compost halfway through the season is sufficient.

Getting White Stems on Your Leeks (Blanching) 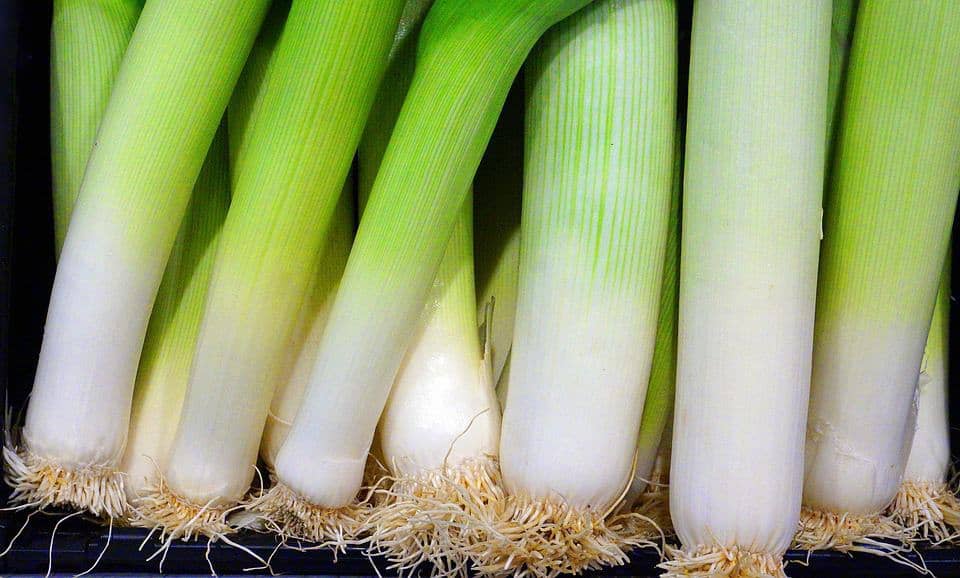 Ever notice how some leeks in the supermarket have really pale, white stalks? The white part of the leek is more tender and has a milder flavor, while the more green the stem, the stronger the flavor, albeit with a slightly tougher texture. It’s white because that part of the stem was not exposed to sunlight for a period of time, which makes the plant tissue softer, and also depletes the chlorophyll (which is why it turns white).

Farmers and market gardeners know there is a demand for tender, white leeks, so they will often hill soil up along the stem as the leeks grow. This is called blanching, and it’s also used for green onions and celery stalks. When it’s harvesting time, the freshly plucked leeks have porcelain-white stalks where they were covered.

In a pot, it’s harder to pull off blanching your leeks by hilling up soil around them, and some people don’t like doing that anyway since you end up with more dirt between layers of your leek stalk. Some people have come up with ingenious ways of blanching their leeks. The best method is to use some cardboard, paper towel rolls, or rolled up newspaper wrapped around each leek, not too tight to constrain their growth, but enough to block out the light. Another option is to transplant them deep, so they already have soil around the stalk as they mature.

When and How to Harvest Leeks

Leeks can technically be harvested at any stage of development, and when they reach maturity, they don’t need to be picked right away, and can be left in the ground.

If you’re growing leeks for a fall harvest, you can even leave them in the ground over the winter. If you have very harsh winters like in the Midwest or Northeastern US, you can apply some mulch for extra protection, but leeks are pretty frost hardy.

The first time I grew leeks in pots, I kept a few leeks unharvested well past the frost. I had to bring the pot inside to thaw out the soil so I could dig ‘em up and cook ‘em in the middle of December.