Leeks are an underrated vegetable which should be up there with onions and garlic in the pantheon of alliums. They’re not only packed with oniony flavor, but also easy to grow and they overwinter extremely well compared to other vegetables.

Most leek varieties are very winter hardy; just look for varieties that take longer to mature–they tend to tolerate frosts more than fast-growing varieties ready to harvest in under 100 days. But with some winter protection, any leek can tough it out in winter. Read below to learn more about how hardy leeks are and how to give them enough protection to survive the frosty months.

Will Leeks Survive the Winter?

There are several variables which affect the winter survivability of leeks. One is the minimum winter temperature. Most varieties can survive consistent winter temperatures of 12.2°F (-10°C) without protection. Whether they can survive deeper frosts will depend on how long they are exposed (even some less hardy varieties can survive very deep temporary frosts) and how much protection they have. Leeks buried under snow will have some natural insulation from frigid air temperatures. The key to surviving winter is not letting the base of your leeks and their roots freeze. 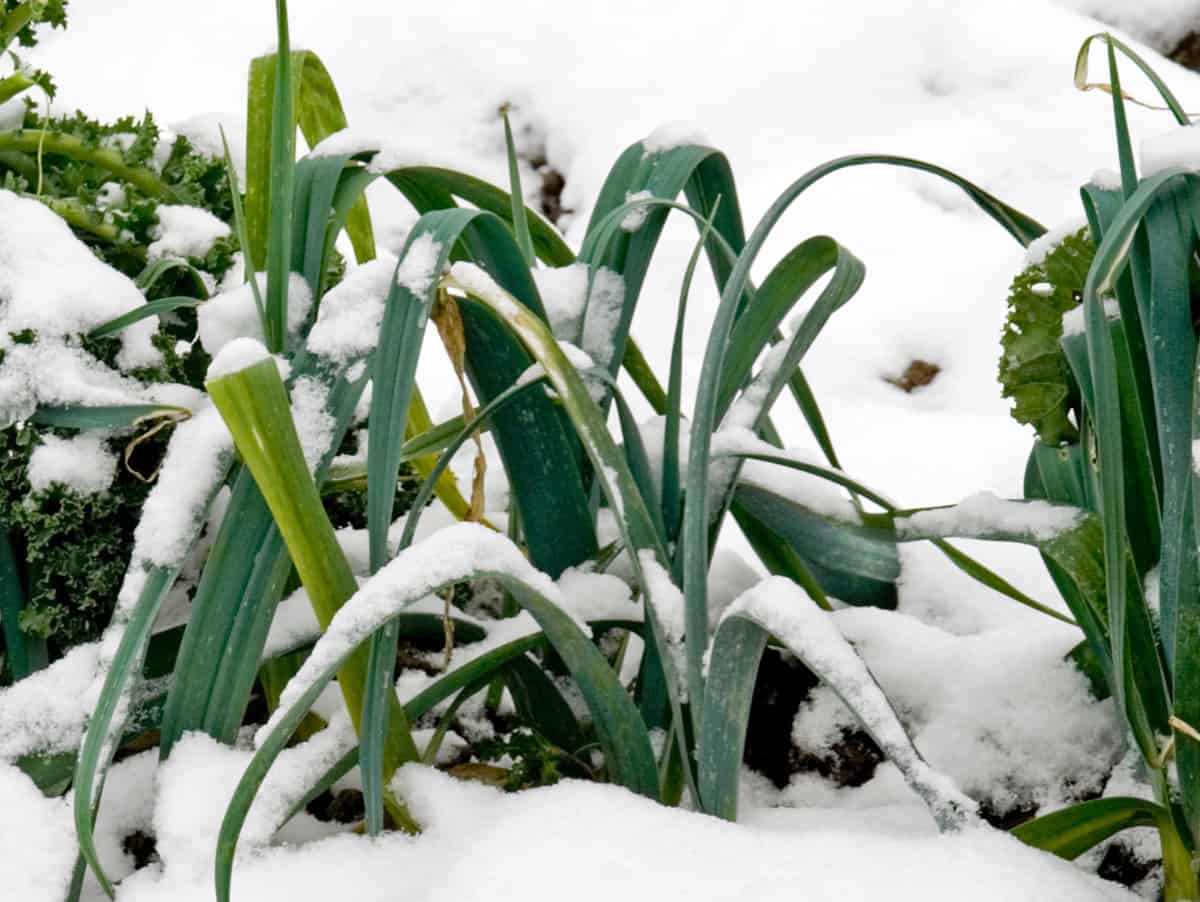 Note: Leeks grown in pots are more susceptible to killing frosts as the roots have a higher chance of freezing and killing the plant. Move your pots away from windy areas or keep them near your home’s south-facing wall to give them a slightly warmer microclimate.

Different varieties of leeks have different levels of winter hardiness. Below are examples of leek varieties and their killing frost temperatures, taken from Sustainable Market Farming’s annual winter kill list[1]. It’s highly recommended you check it out as it lists a variety of different vegetables and the temperatures that they can die at without additional protection.

Adding protection, like a thick layer (at least a few inches) of leaf mulch or straw can greatly improve the survivability of your leeks.

Will Leeks Come Back Every Year?

Leeks are perennials so they will come back every year, but will flower their second year and also produce side shoots year after year. However, they are generally grown as annuals or biennials.

Generally, people grow leeks similar to growing onions, planting in early spring and harvesting in late summer, fall, or early winter. In areas with mild winters, they can even be harvested the following spring. Leeks will flower in their second year, producing a tough flower stalk in the middle, so it’s preferred to harvest leeks before that flower stalk begins to grow to maximize flavor and texture of your leek stalks.

However, leeks are not biennials like onions, but rather true perennials and if left in the ground long enough, they will produce side shoots[2]. Some gardeners let them grow side shoots on purpose so they can harvest tender leek shoots or divide them and plant out a perennial leek patch.

Can I Leave Leeks in the Ground Over Winter?

Leeks can be left in the ground over winter, and is the easiest way to “store” your leeks for winter harvests if you don’t have a root cellar. Keep leeks mulched to keep them alive throughout the winter.

Because they are perennials grown as annuals/biennials, they can be left in the ground over winter, but will require protection to survive especially cold winters. This is actually the easiest way to store your leeks if you intend to harvest them throughout the winter into early spring.

Alternatively, if you have access to a cold root cellar, you can keep them stored in soil or sand for several months[3].

How to Protect Your Leeks in Winter

Keep your leeks well-mulched in winter if you live in an area with freezing cold winters, either hilled up with soil or covered with leaf mulch or straw. If growing leeks in containers, mulch them and move your containers out of the wind, ideally next to a south-facing wall of your home where there is a milder microclimate.

Even the hardiest leeks will require protection to survive extremely cold weather (think polar vortex-type frigid temperatures). As a general rule, if you intend to keep your leeks alive throughout the winter, you should mulch them.

Hilling up at least half of the stalks with soil will provide the crown and roots with extra protection from the frost, but if you intend to harvest in winter and not just the spring, using a thick layer of leaf mulch or straw is a more convenient option for when you want to dig them out in the middle of winter.

Note that if you live in an area with heavy snowfalls, a thick layer of snow can function as a mulch and protect the roots from the cold air above.