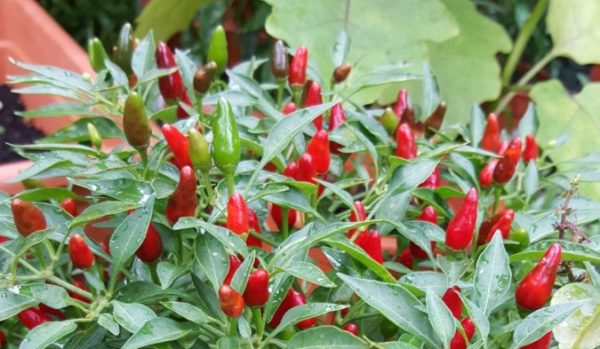 Few things are more satisfying than peeking under pepper foliage in the middle of summer to find loads of peppers hanging off the branches. Occasionally, you may notice a pepper growing upside down. Or, you might have bought a pepper plant from the nursery and ended up with all your peppers growing upright.

This is usually natural and not a cause for concern. Read more below to find out why this happens and when this could be an issue in your garden.

Are Upside Down Peppers Something to Worry About?

There is no situation where upside down peppers, or peppers pointing upward, is a sign of a problem with your pepper plants. Many varieties naturally grow that way, and even in ones that don’t, it’s completely harmless.

There are only two potential concerns with peppers pointing up. The main possible problem is with large-fruited pepper varieties like bell peppers. Having a large pepper pointing upward can put extra strain on the stem and lead to it breaking off prematurely, such as during heavy wind or rain. Most natural upright pepper varieties are relatively small.

Another issue is that they are more vulnerable to damage by birds as the peppers are more exposed (note: birds are not affected by the burning compound capsaicin in hot peppers). This is especially true for small, berry-like peppers. But in many climates where peppers don’t grow naturally, bird damage is not a serious concern.

Why Do Peppers Grow Upside Down?

A surprising number of pepper varieties naturally grow pointing upward. Most Thai chili pepper varieties point upwards in clusters, and the Tabasco pepper (yes, the same pepper used in the sauce) also grows multitudes of little peppers that point to the sky.

2. Young buds pushed or bent upwards can stay pointing up as fruits mature

Just like young branches, the small stems attached to buds are initially very flexible. If a pepper blossom grows up against a stake, cage, or another branch or flower, it can be pushed upward. As the small fruit develops, the stem attached to it becomes thicker and firmer, leading to the pepper growing upside down.

Again, this has no impact on fruit quality, and is only a concern if you have a lot of bird damage or the pepper itself is very large and heavy, straining the fruit stem.

Are Peppers That Point Upright Hotter?

Whether a pepper grows upright or not doesn’t have any impact on the heat level of the pepper. In fact, the hottest peppers in the world (Carolina Reaper, Dragon’s Breath, Apocalypse Scorpion, Primotalii, etc.) all point downward.

Generally you can expect most upright pepper varieties to be hot, but you could find or breed your own heatless upward-facing pepper cultivar.

The two advantages of growing peppers with upright fruit are it makes it easier to harvest and in some varieties it makes the plant look more ornamental.

If you’re harvesting unripe peppers, the green fruits readily camouflage in the dense foliage of pepper plants. Gardeners harvesting green cayennes or jalapenos can miss some and not realize it until they start turning red on the plant. It’s much easier to find unripe green Thai peppers pointing right at you.

If you want a more beautiful pepper bed or just want to grow an ornamental potted pepper plant on your patio, some striking ornamental peppers are a good option, but any pepper can look ornamental with clusters of pods pointing to the sky. Tabasco peppers are surprisingly ornamental.

While the majority of pepper cultivars grow peppers pointing down, there are a lot which grow upright. Below is a short list of some common and not-so-common peppers and pepper families that grow their peppers pointing up.