Cilantro really grows like a weed, and often self-seeds so a cilantro patch often cultivates itself year after year, but when starting your own cilantro from seed, I’ve noticed a lot of people have had trouble with it.

This year I also had difficulty growing cilantro. I had very, very poor germination rates, maybe less than 5% of the seeds I planted (and it was a lot of seeds) actually sprouted. I have also had some issues with young cilantro plants being stunted or dying off in previous years, but with such poor germination I had never seen before, I thought I was doing something wrong.

I later found out that the reason was likely because my seeds were old, around 5 years old, and cilantro seeds (also called coriander) lose viability relatively quickly compared to other large seeds. If you’re wondering why you can’t grow cilantro, the problem isn’t with you but likely environmental factors or poor seed quality.

As I learn more about growing cilantro from seed, I may add more common problems to the list.

Cilantro is pretty finicky when it comes to germination. In fact, reasonably fresh cilantro seeds can sometimes have germination rates lower than 50%. In my experience, they also tend to rot easily if sown into soggy soil.

There are a few reasons why your cilantro seeds aren’t germinating.

First, it could be that your seeds are too old. Cilantro seeds can last up to 2 years without a significant decline in germination, but since the germination rate is already unreliable, that means you need to sow a lot more seeds in order to get a good set of coriander sprouting.

This is also why some people have trouble germinating cilantro from coriander seeds from the grocery store. Store-bought coriander seeds can sprout, but as a dry spice, they can already be too old to sprout by the time you buy them, and if they have been dehydrated with heat, that will make them unviable.

Your seeds may have been sown in soil that is too wet. Sopping wet soil not only leads to root rot and fungal diseases (more on that later) but can also cause seeds to rot before they even have a chance to germinate. Ensure the soil, potting mix, or seed starting mix is moist but not soggy.

This is a common problem many gardeners face, and it doesn’t only affect cilantro. There are many potential causes of cilantro sprouts dying, from drying out to facing a surprise killing frost. But in most cases, the problem is too much water.

The culprit is usually a disease called damping off. It’s caused by different molds that infect and kill young seedlings. These molds, such as species of Fusarium, thrive in wet, cold, dark environments with little airflow, and their spores are commonly found in nature.

Once present, you can’t stop it, but you can prevent it by making sure that the potting mix or soil is well-draining and kept moist but not soggy. If you notice this is a consistent problem, you can take it a step further and sterilize your seed-starting pots with a diluted bleach solution and use fresh potting mix.

If direct sowing outdoors, sow cilantro somewhere where the soil isn’t soggy, and is getting enough sunlight to keep the soil warm to speed up germination and growth.

Once your cilantro plants start getting more true leaves and become established, they will be strong enough to ward off any threats from damping off molds. 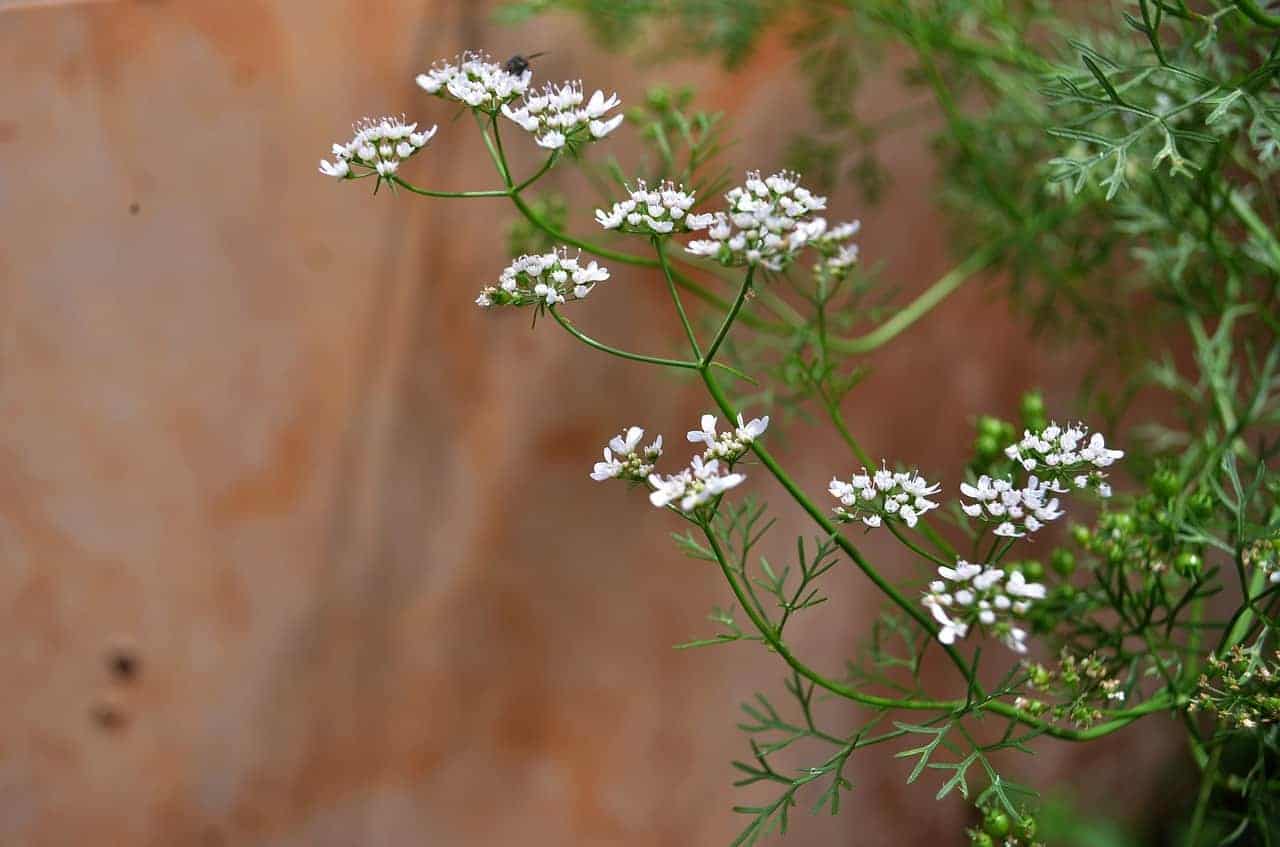 Cilantro Leaves Are Getting Thin

When you see cilantro leaves getting thin, this is the natural process of your cilantro plants switching from vegetative growth to flowering, which is called bolting.

There isn’t much you can do at this point, although some gardeners harvest the thin leaves to try to prolong vegetative growth.

Fortunately, there are ways to delay bolting. Bolting is triggered by hot and dry weather. This is why cilantro/coriander is considered a cool weather plant. The easiest way to avoid bolting is to plant coriander in the middle of summer and harvest it as a fall crop, so it grows and matures over increasing cooler days.

For spring-sown cilantro, you can plant it in a partially shady area so it stays cooler during hot summer days. Some people also drape shade cloth (blocking anywhere from 30% to 50% of sunlight) over their cilantro to keep it from bolting longer.

There are also varieties of cilantro that don’t bolt as quickly, such as ‘Slow-Bolt Cilantro’. Reviews on Baker Creek seeds report that the Slow-Bolt variety can grow well into the height of summer in a partially shaded area without bolting.

Cilantro that has stunted growth is often the result of temperatures that are too cold (and thus slowing down growth) or root damage.

While cilantro loves cool weather, it’s a physiological fact that plants grow more slowly in colder conditions. If you think this is the reason your cilantro is still small, you can cover your plants with some garden fleece or clear plastic (even a plastic jug for small plants) to create a mini greenhouse and warm up the soil, thus increasing their growth rate. However, just be mindful not to do it on a warm day or when the sun is too bright, as your cilantro can quickly overheat.

It’s also possible that your cilantro is stunted because of root damage. This could be due to serious root damage during transplanting, or it could be due to root rot damaging significant portions of the roots. If you suspect this is the reason, I would recommend replanting more cilantro. You can still keep the original cilantro plants there in case they start growing again; and if they don’t, they will get overtaken by the new cilantro, anyway.