Peppers are one of the most satisfying vegetables to grow from seed. They grow into bushy, almost tree-like plants that produce multiple flushes of peppers per season, and are actually perennials as long as they don’t freeze. But getting them started from seed or saving the seeds from your harvest can seem daunting at first.

Below are answers to some of the most common questions about saving, storing, and germinating pepper seeds.

There are some plants that germinate best with light exposure, often those with very small seeds like celery. Peppers don’t require light, but if exposed to light, they can still germinate.

The likely reason why some people notice their pepper seeds germinate better under light is because of the light’s warmth speeding up the germination process, not the light itself.

How Deep Should You Plant Pepper Seeds?

Even if you are sprouting pepper seeds with the paper towel method, you should carefully transplant your sprout no deeper than half an inch deep.

Why Are My Pepper Seeds Not Germinating?

There are several possible reasons for pepper seeds not germinating, ranging from planting immature seeds, germinated seeds dying due to damping off, and trying to germinate pepper seeds in temperatures that are too cold. Note that some varieties (such as superhot peppers like ghost peppers) can sometimes take longer than usual to germinate, up to a month or longer.

If sowing pepper seeds in soil or potting mix, make sure it’s evenly moist but not soggy. Overly wet soil encourages mold growth and can cause damping off to kill seeds and young seedlings. To keep your soil from drying out before your peppers can germinate, you can cover your seed-starting tray or pot with plastic to retain moisture. Alternatively, try germinating pepper seeds using the paper towel method.

Other reasons for having pepper seeds not germinate include planting immature seeds or very old seeds (especially if not stored well). Seeds from green, unripe peppers are not fully developed and will have very poor germination rates. Older seeds tend to take longer to germinate, and very old ones may have reduced germination rates. 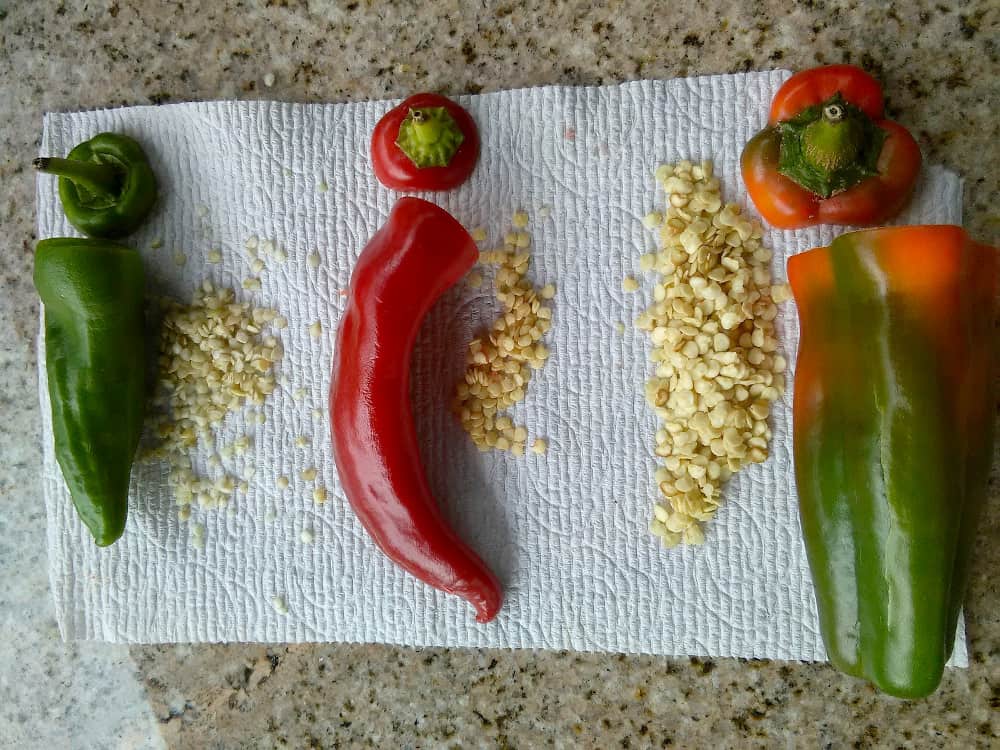 How Long Should You Dry Pepper Seeds Before Planting?

Pepper seeds do not need to be dried before planting if you are planting them right away. They can be sown immediately after being collected from a pepper. If you want to save your pepper seeds to plant at a later date, dry them for at least 7-14 days before storing them.

Mature pepper seeds can be planted as soon as you remove them from a ripe pepper. However, for long-term (or short-term) storage, they should be dried to avoid molding or premature sprouting. Depending on ambient humidity, dry them for at least a week.

Should You Soak Pepper Seeds Before Planting?

Pepper seeds do not require soaking before planting. However, they should be planted in moist (but not soggy) soil or potting mix, or in a moist paper towel.

Pepper seeds do not require cold stratification for germination and can be planted as soon as they are collected from a pepper or dried and stored at room temperature before planting.

The likely reason for this is that chili peppers are native to Central and South America, in regions which don’t typically experience frosts (although some Capsicum species are cold tolerant), so from an evolutionary perspective, there was no need to restrict germination until after winter.

Will Pepper Seeds Germinate After Freezing?

If pepper seeds are dried before freezing, they can remain viable in the freezer. The more moisture inside your pepper seeds, the more likely they will lose viability after thawing.

Can You Plant Pepper Seeds from the Grocery Store?

You can plant pepper seeds from ripe grocery store peppers. If they are hybrids or were cross-pollinated in the field, you may not get the same pepper you bought, but they will still germinate and grow into productive pepper plants.

As long as grocery store peppers are ripe (not green), you can save those seeds and plant them in the garden. Note that these peppers are grown for eating, not planting, so if farmers are growing different varieties of peppers together in the same field, there could be cross-pollination, so the seeds will grow into a hybrid plant that is a mix of the pepper you ate and another pepper variety grown next to it.

In addition, if those peppers are already hybrids, the seeds may not result in the same pepper you saved the seeds from.

However, this has no impact on the viability of pepper seeds. They will all successfully germinate and produce an edible crop of peppers. You may even end up with a pepper that tastes even better than the one you bought!

How Do I Save and Store Pepper Seeds for Next Year?

Saving pepper seeds is easy: simply remove the seeds from a ripe pepper, let them dry completely (1-2 weeks), and then store them in a cool, dark, dry place.

Unlike some other seeds, pepper seeds require no fermentation or special treatment when saving them for next year. The key is to make sure your seeds are taken from fully mature, ripe peppers and to ensure the seeds are allowed to dry for several days (7-14 days depending on room humidity) before storing.

Saving seeds from ripe peppers will guarantee that most of them will be fully developed and germinate when planted. Note that some peppers change color more than once while ripening, such as going from green to yellow to orange to red. It’s only at the final color are they considered fully ripe. Partially ripe peppers will produce some viable seeds, however.

After scraping out all the seeds, let them dry completely. One trick is to lay them on a paper towel, which wicks away some of the excess moisture, and then let them air dry, typically for 7 to 14 days.

Finally, store them somewhere out of sunlight, in a dry place. Ideally, it should be cool as well, but pepper seeds can be stored for years at normal room temperature.

How Long Are Pepper Seeds Viable?

Properly stored, pepper seeds are best germinated within 2-5 years, but they can remain viable for much, much longer. If germinating older pepper seeds, sow more than you need and be patient, as older seeds have reduced germination rates, and older viable seeds may take longer to sprout than fresher ones.

As an example of how long your seeds can last: Tomato seeds and pepper seeds are both viable for similar amounts of time. I’ve been able to successfully germinate tomato seeds over 16 years old with close to a 50% germination rate, but the seeds took more than a week longer to sprout compared to seeds that were less than 5 years old.

The key is to make sure you save a lot of pepper seeds, so even if half of them don’t sprout after a long time in storage, you can still get viable plants (and save more seeds from their ripe peppers).

Can You Save Seeds from Green Peppers?

Green, unripe peppers will not produce viable seeds. However, if the peppers are partially ripe, some seeds may be viable.

Seeds taken from green peppers (this includes jalapenos) are not fully developed, so expect very poor or no germination from those seeds. Peppers generally ripen poorly on the kitchen counter unless they are already starting to ripen. Letting them fully ripen off the plant, while not guaranteeing seed viability, could yield some seeds that can sprout.