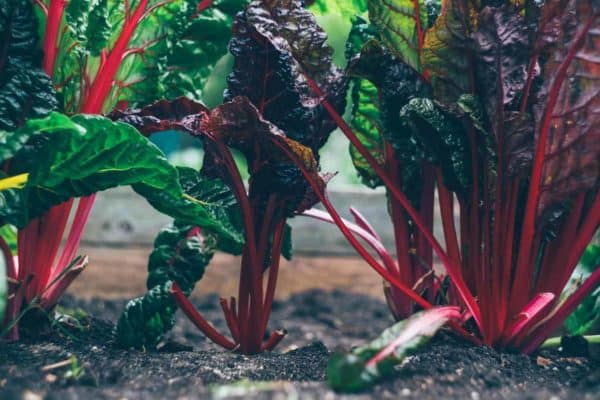 Swiss chard. For many, you either love it or hate it. Swiss chard is one of the most versatile leafy greens you can grow, and is much more heat tolerant than other popular green vegetables like spinach and lettuce. The stalks also add a lot of vibrant colors to dishes.

The problem is that they tend to have earthy flavors, described commonly as “dirt-like”. This is a natural characteristic of Swiss chard, and fortunately, whether you’ve picked it at the grocery store or in the garden, there are ways to reduce these off-flavors.

The earthy, dirt-like taste of Swiss chard comes from the presence of geosmin, a compound naturally found in chard and beets.

The highest levels of geosmin are in the stalks and veins, so you can remove the stalks and eat only the leaves to avoid most of the earthiness. Swiss chard leaves taste very similar to spinach and can even substitute for it in some dishes.

However, those who are growing Swiss chard for the stalks can use several strategies to draw out or mask geosmin and make the stalks taste less earthy.

If you are using Swiss chard stalks in cooked dishes, you can parboil or blanch them before using them and discard the water (or let the water cool down and give your plants a drink).

You can also use Swiss chard in more heavily spiced or seasoned dishes, which will mask the earthy geosmin. Braising and stir-frying can also hide some of the earthiness.

Pickling Swiss chard like celery stalks can also greatly mask any dirt-like flavors, but I would still give them a blanch before pickling.

Why Is My Swiss Chard Bitter?

While the earthiness of Swiss chard occurs naturally regardless of growing conditions, bitter chard is often caused by hot, dry conditions. The bitterness can be in both the leaves and the stem.

To avoid getting bitter Swiss chard to begin with, make sure your chard doesn’t dry out, and if possible, plant in a partially shaded area. You can also grow Swiss chard in pots and move it to the shade during heat waves.

How Do You Get the Bitterness Out of Swiss Chard?

You can use the same strategies for reducing earthy flavors as you can with bitter flavors, such as blanching, braising, or using more spices.

In addition, you can cut bitter flavors using salt, fat, or acid (lemon/vinegar). The salt trick is also why very dark chocolate tastes less bitter with flaky sea salt. Use rich, salty dips for fresh crunchy stalks, roast your chard stalks with salty cheese, or mix them into a salad with a punchy vinaigrette.

Can Swiss Chard Be Eaten Raw?

Swiss chard can safely be eaten raw, and some gardeners even prefer it raw. Raw Swiss chard leaves and stalks can be used in salads. Stalks can be mixed with carrots, celery, and other vegetables and fruits to make a colorful veggie dip platter.

There are many other ways to use Swiss chard which can reduce or mask off-flavors.