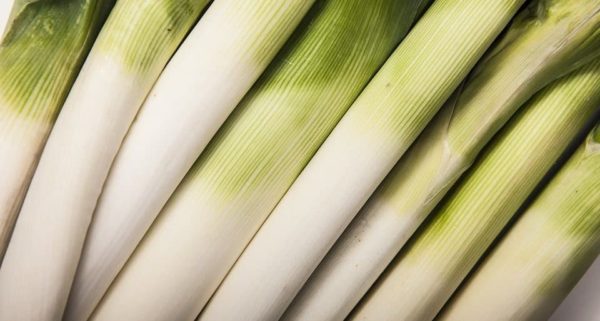 You’ve probably seen those pictures of leek-growing champions giving themselves a hernia while lugging around enormous first-prize leeks. Yes, those leeks are legit and those gardeners are not using mutants or loading up their leeks with hormones.

In many cases, those leeks are of specific varieties which are bred to grow abnormally large, but only if given the right growing conditions.

Home gardeners can grow thick leeks if they are given enough space to grow and adequate nutrients to fuel stalk growth. It takes a long time to grow broad, succulent leeks, but it’s well worth it when you start harvesting them in fall and winter.

What Causes Skinny Leeks and How to Grow Thicker Ones

There are two key factors which you can control that affect a leek’s mature size: spacing and nutrients.

Leeks can grow surprisingly well when crowded, even spaced a few inches apart, but they will compete with each other for nutrients and crowd each other out, causing narrow stalks.

Leeks require good, fertile soil to grow thick stalks. Each layer of a leek stalk forms the base of a leaf, and nitrogen is critical for leaf growth in plants. Use an all-purpose or high-nitrogen fertilizer to feed your leeks. Apply continuous release fertilizer before transplanting and every 1 to 2 months thereafter, or you can apply a liquid fertilizer every 1 to 2 weeks, as per the instructions.

Some good organic fertilizers for leeks include blood meal, blood and bone, fish emulsion, and granular fertilizers with a higher N number in the NPK numbers (e.g. 8-3-4). Conventional fertilizers like Miracle-Gro’s All Purpose blend are also good for leeks, as they tend to have a good amount of nitrogen in them.

When to Plant and Harvest Your Leeks

Leeks take a long time until they’re ready to harvest, so you’re better off planting early, whether you are looking to harvest in the summer or well into the winter (or even early next spring).

Leeks take anywhere from 80 to 120 days to maturity, with the larger varieties typically taking longer. Days to maturity starts after transplanting, so add at least another 20 days from seed to harvest.

Sow seeds indoors any time from February through April; I prefer to sow them around 8 weeks before my average last frost date.

Transplant outdoors when they’ve reached at least 6 inches (15 cm) in height and all threat of frost has passed. Leeks are frost hardy but exposing them to extended cold periods can cause them to go to seed (bolt) early after the temperature warms up, which you definitely don’t want.

The traditional way to transplant leeks is to dig a hole a few inches deep and about 1 to 2 inches (1.25 to 2.5 cm) wide using a dibber or a stick, then plop your leeks in each hole, at least 6 to 7 inches (15 to 18 cm) apart. You can definitely crowd your leeks, as I’ve discussed about growing leeks in pots, but if you want to maximize size, you need to maximize spacing.

After transplanting, water each hole instead of backfilling with soil. The water will cause some soil to cover up the roots, and gradually the soil will fall in and cover the growing stalk over time. The result will be the bottom few inches of your leeks being tender and white.

I’ve already gone into more detail about when to harvest leeks, but you can technically harvest leeks at any stage. To get them at their peak size, harvest them when they are at least 1 to 2 inches in diameter. Larger varieties will easily grow 2-inch stalks and larger.

These larger leek varieties can often be harvested well into the winter, and can even be harvested into early spring, but I would harvest them before temperatures get warmer in the spring of the following year, because they will go to seed after a period of warm weather after the winter.

Most leeks will get to a good size, but some varieties have a higher likelihood of giving you bountiful harvests of massive, broad leeks. Traditionally, these leeks were bred and selected over generations for winter hardiness and storage. It just so happens that thick leeks are more cold resistant and more suitable for storage. So, when looking for leek varieties, in addition to searching for “large” or “giant” varieties, look for ones that are bred for cold hardiness and overwintering.

Below is a list of some tried-and-true leek varieties that, if given the space and nutrients, will likely give you consistently large leeks. While many leeks reach peak size in as little as 80 to 100 days, the largest varieties will take at least 100 days, up to 120 days.

Note: Open pollinated means you can collect and save the seeds and plant them to get the exact same variety of leek, assuming there was no cross-pollination. So you could, if you wanted, allow one or two of your leeks to overwinter and go to seed the following year, save the seeds, and repeat the process, never having to buy leek seeds again!