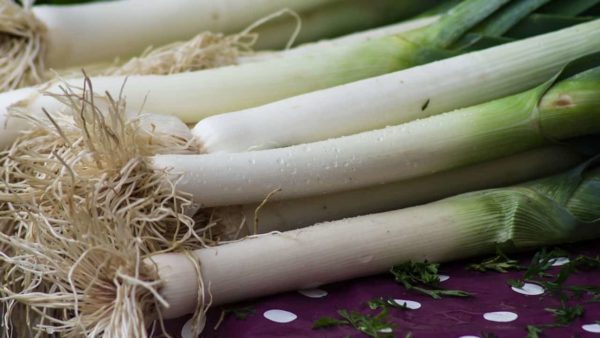 Leeks are a mild-flavored member of the onion family, cousins of green onions, bulb onions, and garlic. In fact, leeks just look like giant green onions. The pale green/white stalks are tender and can be used in soups, salads, or as a substitute for onions in certain recipes. The leaves are tougher and thicker, but still can be used to add flavor to stocks.

Already a popular garden vegetable in Europe, I’ve been encouraging more Americans to start growing leeks. They are very easy to grow, quite resilient, and make an excellent alternative to growing bulb onions. If you already enjoy onions, you will love the delicate, onion flavor of leeks.

New leek growers will notice that it takes a long time until they can harvest leeks. Most varieties mature anywhere from 80 to 100 days from transplanting, with some taking even longer. Fortunately, you can harvest leeks at any time, before or even well after they reach their full size of 1 to 2 inches in diameter. To harvest leeks, hold them by the base, then twist and pull gently. Stubborn leeks can be carefully loosened out of the soil with a small shovel.

How It Takes to Grow Leeks from Seed to Harvest

Generally, it takes leeks 80 to 120 days to harvest from when you transplant them outdoors in early spring, so from seed it could easily take up to 150 days or longer for the longest-maturing varieties. The larger leek varieties tend to take longer to mature, if you want to grow thick leeks.

However, leeks are biennial, meaning their life cycle spans two years, and they won’t normally produce flowers until their second year. Leeks do not turn woody or lose flavor if left in the ground beyond the days to maturity on the seed packet or plant label. Technically, you could can even harvest leeks in winter or very early spring in the following year.

How to Know When Leeks Are Ready to Harvest

While you can leave leeks in the ground longer than the days to maturity, leeks reach their full size when they are at least 1 or 2 inches in diameter. Some varieties will get even 3 inches wide before harvesting.

If, for whatever, reason your leeks are still small, you can still harvest them before they reach full size. Taste and texture will not be different, you will just have a smaller yield. I’ve had this happen to me a few times when overcrowding leeks in pots; some end up reaching their expected size while the others remained the runts of the litter.

Can You Leave Leeks in the Ground in Winter?

Leeks, like onions and garlic, will survive most winters and grow again the following year, when they will grow their flower stalk and produce seeds. Leeks are particularly resilient to the cold, and with a good layer of mulch to protect the base, you could use the ground as a form of “cold storage” until you’re ready to harvest. This works just as well for leeks grown in pots, too.

Harvesting leeks in winter will not affect the taste and texture of the main stalk, even in the frozen ground, but the top leaves may wilt and go soft after a freeze.

Pro-Tip: The latest you should harvest your leeks is early spring the following year, because as the weather warms up, your leeks will start going to seed, which will affect the taste as well as cause a woody flower stem to grow inside the center of your leek stalks.

How to Harvest Leeks

If harvesting in late summer or into the fall/winter when the ground is still workable, many gardeners use the twist-and-pull method of harvesting. Grab the leak by the base and gently twist the stalk to loosen the roots and tease it out of the soil, then pull it out.

If it won’t budge, carefully use a small shovel to dig around it and underneath before pulling, being mindful of avoiding stabbing the part of the stalk underground.

Harvesting in the dead of winter is extremely rewarding, but can also be difficult as the ground is frozen. Pull away any mulch and dig around the leeks to break up the soil so you can harvest. For leeks in containers, you can bring them inside to a garage to thaw before harvesting (this is what I did back when I first grew leeks in pots).