Edible and ornamental are not mutually exclusive, especially when it comes to chili peppers. One trend in recent years has been to grow peppers with black leaves, which can create a striking contrast in your pepper garden or provide an edible treat in an ornamental garden. But be warned: ornamental peppers are usually very hot.

If you look closely at chili peppers with black leaves, you’ll notice they aren usually not truly black, but rather very dark purple. This is caused by anthocyanin pigments, which can make plants and fruits look purple or black. These are naturally produced in response to sunlight. Some non-black varieties occasionally show black/purple coloring in the fruits and stems.

The following pepper varieties will all produce dark purple/black leaves, but the leaves all start off green, then turn dark purple as they mature in sunlight. The more sun they get, the darker the leaves will get. In all varieties, the fruits and usually the flowers are purple as well.

Probably the prettiest pepper in the list, the Black Pearl is exactly as the name suggests. Its semi-glossy, dark purple, almost pitch black foliage is crowned with upright clusters of round, pearl-shaped black-purple peppers. Black Pearls turn red when fully ripe, but look just as striking when ripe, unripe, and during the ripening process.

The flowers themselves are also purple instead of white like normal peppers. Due to its ornamental flowers, peppers, and leaves, it was designated an All-America Selections winner in 2006.

Black Pearl peppers are prolific producers and have a good amount of heat, much hotter than a jalapeno. The flavor is like other C. annuum peppers, so the ripe fruits are sweet and slightly tangy. If you want the darkest, blackest leaves on a pepper plant, Black Pearl is highly recommended. A Bountiful Gardener favorite for in-ground and container gardens.

The fruit of Black Olive peppers also ripen to red, and point upward to the sky in clusters. The foliage tends to stay more purple-green compared to the pitch black leaves of the Black Pearl pepper unless given plenty of sunlight.

Black Olives are excellent as both an ornamental or eating pepper. Very high yields.

The Pimenta de Neyde is the only pepper on this list of the C. chinense species, making it a relative of the habanero. The origin of this pepper is obscure, but it appears to actually be a natural cross of an unknown C. chinense and C. annuum variety from Brazil.

Not only are unripe Pimenta de Neyde peppers purple, but they’re unique in that their ripe peppers remain purple. The way to check if they are ripe is to cut into them and see the color of the interior walls for reddish hues.

Because of its C. chinense ancestry, Pimenta de Neyde has a similar fruity and floral aroma and flavor that habaneros and scotch bonnets have. And yes, these peppers are also extremely hot like their habanero cousins.

The peppers point downward and are elongated. Very prolific and the plant itself can grow into a small tree-like shrub. In a 5-gallon container or in the ground, it can easily grow 3 feet tall or more. Highly recommended for hot pepper lovers. 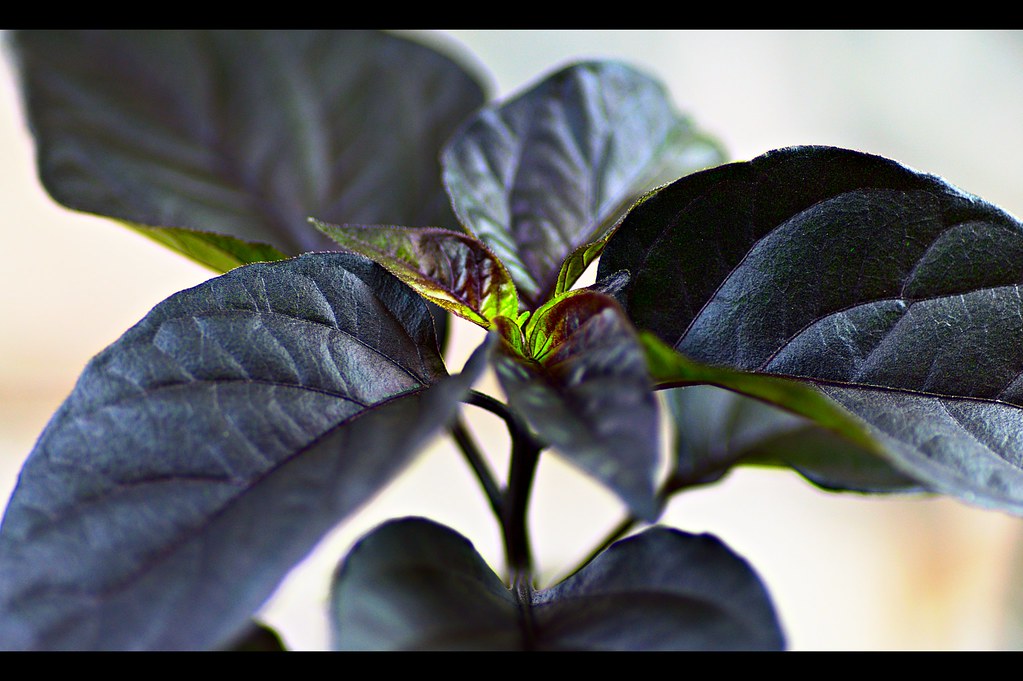 The Purple Flash pepper is another unique pepper with black/purple leaves. Its name stems from the “flashes” of bright purple seen on some of the leaves. The upward-facing dark purple flowers and peppers themselves are often surrounded by small white leaves. While there are some peppers with leaf variegation (leaves with more than one color) this type of variegation is unique.

The fruits are small, round, glossy, and berry-like in appearance, and point up to the sky, turning red when fully ripe. They are also quite hot, with the mildest pods having jalapeno heat, and the hottest ones reaching well into cayenne territory.

The plants themselves are naturally compact and bushy, making Purple Flash perfect for containers, vegetable beds, and planted with ornamental flowers and hedges. 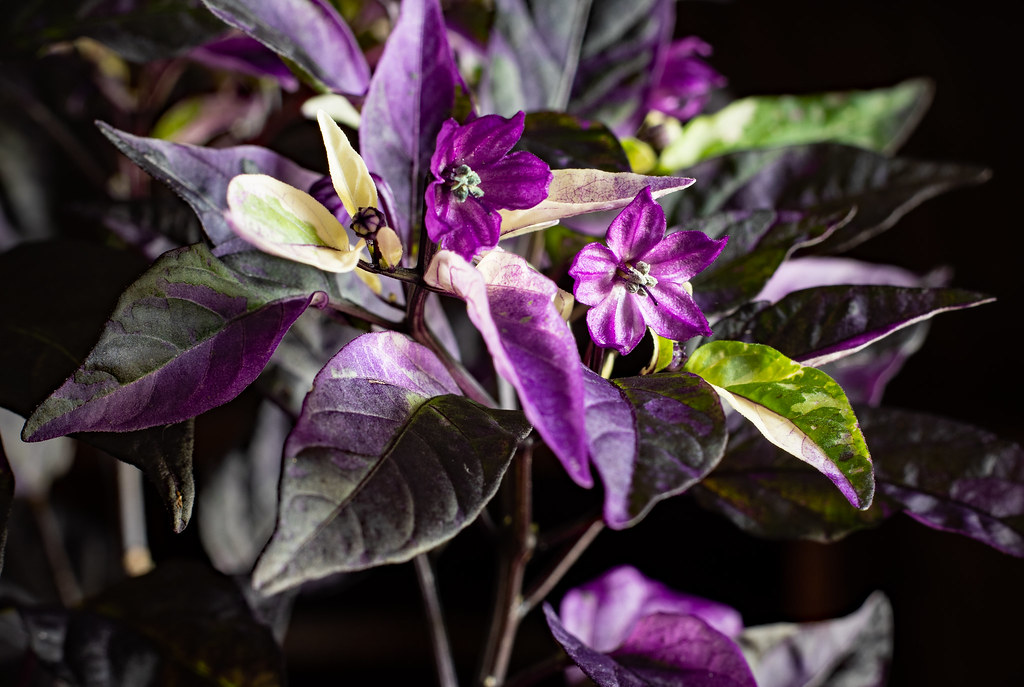 The pods themselves tend to point up or down, and the plant is quite productive, although not as much as some of the other plants on this list. The plant itself grows vigorously into a large pepper bush, up to 30 inches in height, sometimes larger.

Bellingrath Gardens pepper fruit start off firm, but after ripening, they will quickly turn very soft and juicy, making them not as good for fresh eating but excellent for sauces and cooking.

For those who want a milder, smaller, Thai-like pepper, the Royal Black fits the bill. The Royal Black chili pepper produces large amounts of pointy, upward-facing black pods surrounded by dark purple-black foliage. The stems are also almost black. Like the other peppers on this list, the flowers are also violet purple.

This pepper has many similarities to the Black Pearl but the fruit and leaves are more slender, and the peppers don’t grow in tight clusters. When ripe, the pods turn red, looking almost like small Thai peppers.

For an ornamental, the Royal Black has good pepper flavor when ripe and can be used in cooking or can even be pickled.

All the above pepper varieties will produce black or dark purple leaves (with the exception of Purple Flash which is supposed to produce some bright violet or white patterning). This dark color is due to the presence of black/purple anthocyanin pigments.

Anthocyanins are produced in the leaves and stems based on sunlight. In fact, the new leaves are almost always green (although dark green) and then turn purple and even black. But this will depend on how much sun your pepper plants are getting. Always make sure your peppers are getting full sun, at least 6 hours per day of direct sunlight. The more sun, the darker the leaves will get.

Yes, purple peppers, and in fact all ornamental peppers, are edible. However, their flavor may not necessarily be as good as other peppers, since most ornamental peppers are grown primarily for their looks, not their taste or aroma. That said, when ripe, they should have good pepper flavor and sweetness or tanginess like other non-ornamental varieties.

In almost all the above varieties, the peppers are unripe when purple, so any complex flavors like sweetness or fruitiness won’t be fully developed, but they will still pack a lot of heat. The only exception is the Pimenta de Neyde, which stays purple even after it ripens.