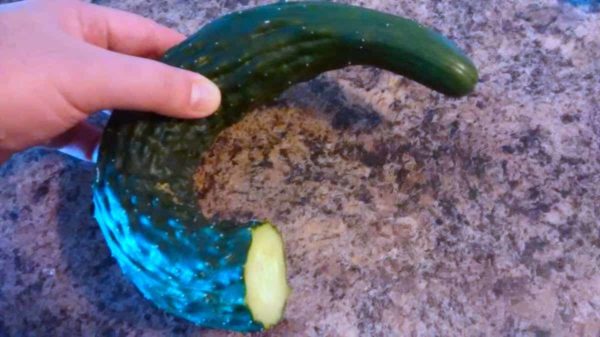 Most of us have asked ourselves why our cucumbers don’t look like the perfectly straight, uniform cucumbers at the grocery store. For some of us, it’s not a big deal, but some gardeners really want to grow something that not only tastes better than store-bought cucumbers but also looks better. And it’s way easier to slice straight cucumbers evenly than misshapen ones.

If your cucumbers are not growing evenly, it’s nothing to fret about – it’s almost certainly not your fault. Grocery store cucumbers are often grown in greenhouses, where the climate, nutrients, and pollination is carefully managed for optimal, uniform growth. My cucumbers are almost never perfectly straight but they still smell and taste so much better than anything at the supermarket.

Why Your Cucumbers Are Not Growing Evenly

1. Nutrients (too little or too much)

For proper fruit development, cucumber plants need enough nutrients, chiefly phosphorus and potassium. A lack of these nutrients can lead to malformed cucumbers. Phosphorus is essential for flower, fruit and seed development, and potassium is kind of “jack-of-all-trades” which is important for overall plant health, including flower development and heat and cold resistence (more on that later).

Generally, you want to use fertilizers with higher P and K numbers in the NPK value. For example, a 5-10-10 or a more gentle 2-5-3 NPK with micronutrients like calcium would be ideal for cucumbers. There aren’t many “cucumber fertilizers” on the market but look for any fertilizers for vegetables, fruiting/blooming, or even just tomato fertilizer. Most all-purpose fertilizers have more nitrogen (N) which will be adequate for growing cucumbers, but won’t have the ideal nutrient ratio for healthy fruit production.

It’s almost impossible to give cucumbers their ideal growing conditions outdoors (which is why greenhouse cucumbers look impeccably straight and plump), but extreme environmental conditions can negatively impact fruit development.

Cucumbers are 95% water, and they grow rapidly – a small cucumber can easily grow full-sized within a week or so – and water is essential for the movement of nutrients into the developing cucumber fruit. Cucumbers that don’t get enough water are likely to have problems developing properly all along the length of the fruit, and can also suffer a problem called blossom end rot which results in the bottom end becoming soft and black.

However, in my experience, the most common cause for misshapen cucumbers is either too hot or too cold weather.

Cucumbers are a quintessential summer vegetable but too much heat can stress the plant in various ways, such as increasing transpiration, which is the movement of water from the roots to the leaves and out the pores (stomata) of the leaves. In really hot, sunny weather, this can cause the plant to be unable to take up enough water to keep up with transpiration even if the ground is wet.

Very high temperatures can also cause pollen to become sterile, which will affect pollination and therefore cucumber growth (more on that later).

Cold snaps or prolonged temperatures below 55°F (13°C) can also lead to cucumber fruit damage, such as pitting or softened areas on the fruit; as cucumbers keep growing these damaged parts can cause the rest of the cucumber to look misshapen.

Anecdotally, I have also found that my cucumbers tend to be stunted and more misshapen towards the end of the season when temperatures start getting colder.

After environmental stress, the second most common reason for your cucumbers not growing straight or being misshapen is poor pollination.

Cucumbers, like zucchinis, melons, and squash, are part of the cucurbit family of plants which have separate male and female flowers on the same plant. Female flowers look like they have a tiny cucumber behind them (because they do!) and male flowers just have a stem. Cucumbers need to be pollinated, either by insects or gardeners, by transferring pollen from male flowers to female flowers.

However, unlike other fruiting vegetables, cucurbits like cucumbers can be partially pollinated, and partial pollination of cucumbers [PDF] can cause the pollinated parts of the cucumber to grow while the rest stays undeveloped and small. What that means for us gardeners is curly, bulbous cucumbers that look like they haven’t properly developed in one or more sections of the cucumber.

If pollination is a problem in your cucumber patch, you can plant your cucumbers near flowers to attract more pollinators, manually pollinate them yourself, or plant parthenocarpic cucumber varieties which can grow without pollination.

Even if your nutrients are balanced, weather is ideal, and pollination is complete, you can still end up with cucumbers that are not straight.

If you want straight cucumbers, make sure you grow your cucumber plants vertically, as hanging cucumbers will naturally elongate into a straight fruit.

Also ensure that cucumbers aren’t sitting on the ground or touching a stake or string which can force them to bend as they’re growing.

Moreover, be sure to give your cucumbers plenty of space to grow. If growing cucumbers in containers, give them a large enough pot to grow, and don’t crowd your cucumbers too much. I have planted two cucumbers side by side with good results but I always give enough space around them. Cucumbers that have to compete with other plants for nutrients and water will often have smaller fruit.