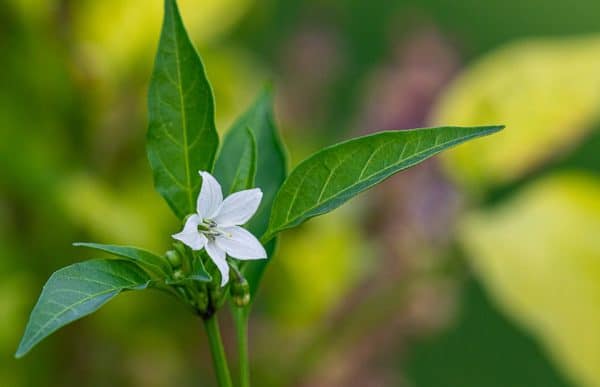 There are few things more exciting for a gardener than seeing those first blooms of the season, whether they’re ornamental flowers or clusters of little pepper blossoms. Knowing how pepper plants flower can help you increase your yields and troubleshoot potential problems in the garden.

Explained below are some of the common questions regarding pepper flowering and pollination. This page will be periodically updated with more questions as they come up.

When Do Pepper Plants Flower?

When pepper plants flower depends on the variety, but for many varieties, the first buds appear right before or after the stem begins to fork and branch out. Some varieties will have the first flowers grow along the main stem, while others will only produce flowers on branches.

What Color Are Pepper Flowers?

Peppers come in a wide range of colors, but even pepper flowers have some variation in color as well. White is by far the most common color of pepper flowers, but they can occasionally come in purple, or white with light green patterning on the inside.

The pepper flowers with light green patterning are a common feature of Capsicum baccatum varieties, such as the Lemon Drop, Aji Pineapple, Brazilian Starfish, and Bishop’s Crown.

For the most part, purple pepper flowers are found in purple pepper varieties. However, the purple pigmentation in peppers goes away as the pepper ripens. Purple peppers are unripe. A good example is the Chinese 5-Color pepper, which has pale purple flowers. The peppers themselves start off purple, then gradually turn cream, yellow, orange, and finally red when it ripens. Another example is the ornamental Black Pearl pepper, which has vivid purple flowers and dark purple peppers which ripen straight to a bright red color.

Do Chili Pepper Plants Need to Be Pollinated?

Pepper plants self-pollinate and are self-fertile, so they don’t require pollination from insects or manual pollination by gardeners. Just the natural movement of the plants from the wind is enough to release pollen and pollinate

Pepper flowers are known botanically as perfect flowers, meaning they have both female (stigma) and male (anthers) parts on the same flower. This is in contrast to plants with female and male flowers on the same plant (such as cucumbers, squash, and watermelons) and plants that have separate male and female plants (such as kiwis and willows).

Pepper plants are also self-fertile, so they don’t require another pepper plant to be pollinated or even to increase yields (in contrast to blueberries which self-pollinate but produce a bigger, better crop if they are pollinated with another variety).

What this means is that you can grow peppers without requiring pollinators or different varieties to ensure a good harvest.

That said, some pepper growers will try to guarantee successful pollination by periodically giving their plants a gentle shake. You can also touch the back of pepper flowers with an electric toothbrush, which will cause enough vibration in the flowers to release loads of pollen from their anthers. You can also do this with other self-pollinating, self-fertile vegetables like tomatoes and eggplants. Neither of these are necessary when growing outdoors, but if you’re growing in a greenhouse or indoors without much airflow, it will improve pollination.

Why Are the Flowers on My Pepper Plant Falling Off? (Pepper Blossom Drop)

While it’s normal for some flowers to fall off a pepper plant, significant flower drop can be a sign of plant stress or too much nitrogen in the soil. Less likely but still possible causes are a lack of airflow or extremely high humidity, both of which reduce pollination, causing blossoms to drop.

It’s common to see some flowers falling off pepper plants. Under normal circumstances, it’s either because those flowers were not pollinated or because the plants have too many peppers on them already and can’t direct enough energy to more fruit development. In extremely high humidity, you may experience less successful pollination (and therefore more blossom drop) as the pollen becomes more sticky and less likely to release from the anthers. Similarly, a lack of airflow, such as in a greenhouse or indoors, can reduce the release of pollen and therefore pollination success.

However, if you’re seeing consistent blossom drop and few peppers forming, plant stress or high nitrogen are the two most likely causes.

Sources of plant stress commonly include disease or pest pressure, underwatering, and overwatering. A pepper plant experiencing stress will focus its energy on survival and developing the peppers already on the plant instead of producing more peppers.

Too much nitrogen in the soil, often caused by using a high-nitrogen fertilizer (a high N value in NPK numbers), can cause the pepper plant to focus on growing lush green foliage instead of blooms and fruits. While plentiful nitrogen is ideal early in the growing season, once your pepper plant starts forming buds, it’s better to switch to a fertilizer with higher phosphorus and potassium. Most tomato fertilizers work perfectly for peppers, and you can use generic “bloom” or “fruit” fertilizers in a pinch.

Should You Pick the First Flowers Off Pepper Plants?

Small pepper plants which haven’t been transplanted or were recently transplanted can benefit from removing the first buds and flowers so the plant can focus more on vegetative growth and support more peppers later on. However, if your growing season is very short or the pepper variety you’re growing takes a long time to produce ripe peppers (such as habaneros, ghost peppers, and Carolina reapers) then it may be worth keeping the first flowers to get a larger harvest in the season.

The reason some gardeners remove the first flowers and buds off their small pepper plants is that fruit development takes a lot of energy, which could be better used to grow more branches and leaves which can support even more flowers and peppers for the rest of the growing season. The end result is a larger harvest by the end of the season.

However, if you live somewhere with a very short growing season of a few months, you may not have enough time to reap the benefits of giving your pepper plants a little more time for vegetative growth. Similarly, if you’re growing late-season peppers like ghost peppers, they take a very long time to produce ripe peppers (up to a month longer than sweet peppers and cayennes in some cases) and so picking off those first flowers will prolong your wait for ripe pods even more.

Essentially, the rationale is that picking off the first flowers will delay your first pepper harvest but give your plants a chance to grow bigger so they can produce more peppers in the long run. However, if you don’t have enough time (either because of a short growing season or a late-maturing pepper variety) then you may not get as much of a benefit if you pick off those flowers.

There are two factors that you can use to promote more pepper flowering and fruiting: energy and nutrients. Generally, the more solar energy your pepper plants, the more flowers they will produce. Having enough nutrients, particularly more phosphorus and potassium and less nitrogen, will promote flower growth and development.

If you’re growing your peppers outdoors, you likely have all the energy (sun) your pepper plants need, but note that pepper plants grown in partial shade will produce fewer peppers than ones grown in full sun. If you’re growing peppers indoors under artificial light, stronger lights correlate with more prolific flowering. While fluorescent lights are excellent for seedlings and supporting healthy foliage, you will get more flowers and peppers with a brighter light. Most full-spectrum LED grow lights in the $30-100 range are more than enough for growing pepper plants.

Once your pepper plants start reaching 10 to 12 inches tall and are producing some flowers, switching to a fertilizer with lower nitrogen (N), high phosphorus (P), and some potassium (K) is ideal – most bloom/fruit fertilizers are already formulated for pepper flowering. Too much nitrogen can lead to a beautiful, healthy, lush plant but with few peppers and significant flower drop.

Do Pepper Plants Produce More than Once?

Pepper plants can rebloom as peppers are picked. Depending on the length of your growing season and the type of pepper, you can expect two to three flushes of flowering and fruiting. If you overwinter or grow peppers indoors, you can prune back your peppers and get another prolific harvest from the same plant over and over again.

You may notice that while growing peppers that initially there are a lot of flowers, but then as your peppers set fruit, the blooms really slow down, even if you can see tiny buds forming at the ends of branches. At this point, your pepper plants are focusing more on developing the fruit already on the plant. After harvesting your peppers, you’ll start to see the plant flowering again, giving you another flush of peppers.

Peppers are perennials, so they can produce multiple flushes throughout the growing season and potentially for years; the only reason they are grown as an annual is because they can’t survive hard frosts.

For peppers that are usually picked green, like jalapenos and small green chili peppers, you should get another bloom and another flush of peppers to harvest before the end of the season, sometimes even getting a third harvest if you have a longer growing season. For peppers with long growing seasons that are picked when ripe (like ghost peppers), you will see more of a single summer-long bloom that doesn’t seem to end until the fall.

That said, when overwintering or growing indoors, you don’t have to worry about how long your growing season is, so you can prune back your pepper plants, let them grow back, and produce another full flush of peppers again.