If you’ve ever had a really delicious pepper from a restaurant, supermarket, or a friend’s garden harvest, you might be thinking if you could plant the seeds from that pepper and grow your own. Peppers are one of the easiest vegetables to grow from seed, but there are some things to consider to increase your chances of success. 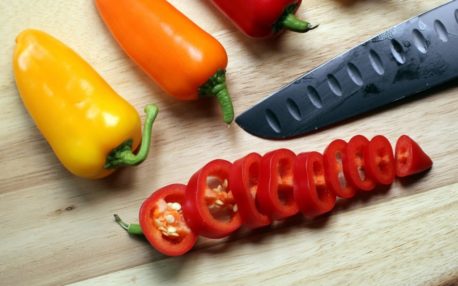 “… you have the highest chance of your seeds sprouting if they’re from a ripe pepper.”

Peppers can be grown from their seeds, even if the seeds are from peppers purchased at the supermarket. However, seeds should ideally be taken from ripe peppers because green, unripe peppers do not have fully developed seeds and their germination rate is low. Fortunately, letting peppers ripen off the plant, such as on a kitchen counter, can help increase the viability of the seeds. Pepper seeds can be planted directly into soil, potting mix, or other growing medium without having to dry them first, but if you intend to store them for future plantings, you should dry them for at least a few days to a week so they last longer and don’t get moldy.

Can You Plant Pepper Seeds from the Grocery Store?

The short answer is yes, if they are ripe. The viability – ability of your seeds to sprout – significantly goes down if you plant them from an unripe fruit. For peppers, that means you have the highest chance of your seeds sprouting if they’re from a ripe pepper. Fortunately, even if the pepper ripens off the plant (such as a jalapeno that starts turning red on your kitchen counter) your seeds will still have a better chance of sprouting.

But what if you have a ripe pepper, like a red bell pepper, a cayenne, or a habanero? You can plant them normally and should have no problem with germination. However, there is a chance you might not get exactly the same pepper. Peppers can easily cross-pollinate if grown close together, and peppers grown for the supermarket aren’t isolated, so it’s possible a bell pepper might get pollinated with the pollen from a jalapeno in the next row. Cross-pollination does not affect the peppers you harvest, but it will create crossed seeds which will grow into a hybrid plant if you sow them the following year.

It can be really fun planting pepper seeds from the grocery store and seeing what you get. If you end up with a cross and it actually tastes good, you can save the seeds and replant them again, and gradually over generations of saving and planting seeds, the traits will stabilize and you will have your own unique variety!

Can You Plant Pepper Seeds from Green Peppers

Because green peppers are unripe, that means green bell peppers and jalapenos have a very low germination rate, but there’s nothing stopping you from planting a whole lot of them and seeing if anything sprouts. Even if only 5% of your seeds sprout, that’s still a lot of potential plants from a single green bell pepper or a few jalapenos. 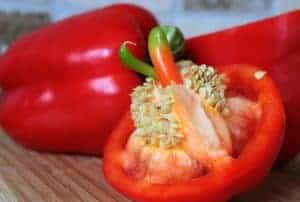 Can I Grow Peppers from Fresh Seeds?

Now, if you want to save seeds for next season, you should let them dry because you don’t want them to sprout early or get moldy. For pepper seeds, I let them dry in a paper towel for a few days, up to a week, then store them in a little plastic bag in a cool, dry place out of the light. It’s suggested that pepper seeds can store for 2-5 years if properly dried and stored, but in my experience, that’s only a guideline and while you might lose some viability in 5 years, many pepper seeds will still germinate well beyond that.

How Long Does It Take to Grow Peppers from Seed?

I have a lot of experience growing peppers. Not only do I grow them outside during the main season but also grow them indoors as well, so I’m familiar with how long it takes on average to get peppers. After planting, your seeds will start to sprout in as little as a few days, but be patient because it can take up to a few weeks before they sprout. Depending on the pepper variety and species, it can take around 3 months to go from sprouts to edible green peppers, and anywhere from 1-3 more months before you get ripe peppers.

Small peppers like Thai and Cayenne peppers tend to ripen relatively quickly, and if you pick them green for eating or cooking with, you can have continual harvests starting after 3 months. Larger peppers tend to take a bit longer to ripen.

But the peppers that need the longest time to grow are the Capsicum chinense varieties, which include most of the really hot peppers. Think of Habaneros, Ghost peppers, Carolina Reapers, Scorpion peppers, and Scotch bonnets. Those can take several months longer to ripen.

Let me give you some examples from my own 2020 growing season.

I live right along the edge of Zone 6 and Zone 5, and planted all my pepper seeds on March 17, 2020. I transplanted them all outside on May 21, and some of them were already producing flowers and buds. My banana peppers, which are usually picked unripe (pale yellow/green), have been getting picked regularly since mid June. My Jimmy Nardello peppers, an amazing long sweet pepper, were starting to ripen in July. I’ve also been growing a really hot variety called Fatalii which is literally just starting to ripen its first pepper at the beginning of August as I write this.

Can You Make Peppers Grow Faster?

There are some ways to speed up this process. One is to grow with hydroponics, which will make your pepper plants grow and produce more rapidly, although the actual ripening process might not necessarily happen more quickly. This year, I tried growing a pepper outdoors hydroponically. It had severe transplant shock and seemed to barely grow for a month. Now in August, it’s completely caught up with the other peppers in size and number of green peppers ready to ripen.

As far as getting ripe peppers faster, as far as I know, the only way to do it is to constrain the growing space of your pepper, i.e. growing it in a small pot. Plants are surprisingly aware of their surroundings, and if a pepper plant realizes there is no more space left to grow, even if it’s still a small plant, it will start producing flowers, peppers, and ripe fruit to try to create new offspring as quickly as possible.

Do I Need to Buy Organic Peppers to Grow Peppers from Seed?

No, you don’t need to buy organic to successfully grow peppers from their seeds. Seeds from a pepper that is certified organic will grow the same as one from a pepper that isn’t. When you plant that seed, if you grow it organically yourself, you will have your own organic peppers.

Can I Grow Peppers from Seeds in Cooked Peppers?

Unfortunately, cooking will kill the seeds, so they will not grow.

Can I Grow Peppers from Seeds in Chili Flakes?

Yes, you absolutely can grow peppers from seeds in chili flakes, but keep in mind that older seeds not stored in ideal conditions are less viable, so plant more seeds than you want to guarantee success.

Can I Plant Pepper Seeds from Salads and Sauces?

It’s possible to grow peppers from seeds you’ve picked out of salads. For sauces, it depends if it’s a cooked sauce or not. Uncooked sauces, salsas, etc. can still have viable seeds in them, even if they have acids like vinegar or lemon juice added. It also depends how long the seeds have been kept in the sauce. If it’s at a restaurant, where sauces are usually made fresh, the seeds will probably still be viable.